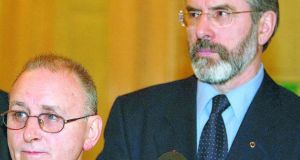 Sinn Féin leader Gerry Adams has rejected claims by an alleged former British agent that he directly ordered the killing of IRA informer, Denis Donaldson in 2006, on foot of a demand by leading republican Thomas “Slab” Murphy.

Mr Donaldson, a former Sinn Féin group administrator at the Stormont Assembly, was shot dead in Co Donegal in April 2006 after he confessed to being a British agent, which directly led to the collapse of Stormont’s institutions.

His killing, which was claimed three years later by the splinter Real IRA, has still not resulted in prosecutions. His inquest has been repeatedly postponed on foot of applications by An Garda Síochána.

The man, who infiltrated the IRA for over a decade, was interviewed over months by the BBC’s Spotlight programme.

He claims to have worked for the RUC special branch from 1997 – one of up to 1,000 informers of different levels of importance who were allegedly passing on information about the IRA’s activities.

In a series of meetings, the agent, known only as “Martin”, claims Mr Donaldson’s killing was sanctioned by Mr Adams. “I know from my experience in the IRA that murders have to be approved by the leadership,” Martin said. Specifically asked to identify who ordered the killing, he went on: “Gerry Adams, he gives the final say.”

Mr Donaldson moved to Donegal after he publicly admitted being a spy. The IRA denied involvement when he was shot dead. The Real IRA’s claim of responsibility in 2009 was untrue, the alleged agent claimed, and had been an attempt to bolster its reputation with supporters.

Spotlight said “Slab” Murphy, now serving a sentence for tax evasion in the Republic, had insisted on Mr Donaldson’s killing in order to maintain IRA discipline. Spotlight said it tried to contact Murphy but had received no reply.

Questioned about the extent to which the IRA had been infiltrated, Denis Bradley, who played a leading role during the peace process, said he inspected records held in London six years ago that illustrated its scale.

“At any one time, the security services were running about 800 informers throughout the Troubles.

“Now that’s a lot of people within a small community of people,” he said.