HSE confirms practice is still relied on, despite Coalition promise to phase it out 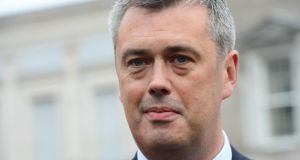 Fifty children with mental health problems have been admitted to adult psychiatric units so far this year, new figures reveal.

The Health Service Executive (HSE) confirmed almost a third of all psychiatric patients aged under 18 were seen in adult mental health units from January to May.

The figures for the first half of the year reveal the practice, which was to be phased out, is still heavily relied on.

“It simply has to end. It is completely inappropriate. The first point of contact for children is in an inappropriate location,” he said.

“It is a major ‘no no’ from the point of view of stigma, for the long-term treatment of that child and it is unacceptable.”

The Fine Gael/Labour coalition vowed to phase out the practice in their 2011 Programme for Government.

In its response to the question from Mr Keaveney, the HSE said 160 children and adolescents were admitted to inpatient units in the first five months of the year.

Of those 50, 17 were admitted in January, four in February, eight in March, 12 in April and nine in May.

“There is a range of factors which can influence the clinical decision to admit to an adult acute inpatient unit,” a HSE spokesman said.

“Some of these admissions relate to a crisis admission where no adolescent bed is immediately available.

“Distance to the nearest [child and adolescent] inpatient unit can also be a factor when immediate clinical assessment and treatment may be the requirement.

“In some cases, the presenting clinical needs of the young person, (who may be nearly 18 years old) may be more appropriately assessed and treated in an adult unit.”

The practice has been heavily condemned by various groups including the Children’s Rights Alliance and the Mental Health Commission.

In a report in 2011, the commission – the national watchdog for psychiatric services – said by the end of that year there should be no more admissions of children under 18 to adult units.

Mr Keaveney said the figures were a damning indictment of the Government’s mental health policy. “Across the country our mental health services are stretched to the limit and more people are waiting longer for access to essential care,” he said.

“The Government needs to seriously address the under-investment in mental health in the budget and put our services back on a course to deliver proper care for patients.”

1 How one couple’s weekend away resulted in 30 Covid-19 cases
2 Taoiseach tells TD to ‘cop on’ over criticism of contact tracers asking about pubs
3 US presidential debate: who won, was it any good, were there any surprises?
4 Joe Biden is dodging the culture war to focus on class – and he’s right
5 Miriam Lord: Government’s latest comedy of errors offers little to laugh about
Real news has value SUBSCRIBE