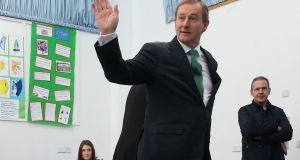 Taoiseach Enda Kenny: Needless mistakes, like his disastrous “whingers” comment in the final weekend of the campaign, should not have been made. Photograph: Brian Lawless/PA Wire

Yet, collectively, these were the battlefields on which Fine Gael chose to fight the general election of 2016. The lessons learned from those past electoral contests were not applicable to this one.

What initially seemed like a catastrophic result – with party general secretary Tom Curran estimating on Saturday morning that Fine Gael would end with between 43 and 47 seats – looked better when a final picture began to take shape.

Tight vote management in constituencies like Dún Laoghaire saw Fine Gael take two of three available seas and retain two out of three in Limerick County and two out of four in Dublin Bay South, pushing the party’ s final tally towards the early to mid-50s.

That outcome indicates Fine Gael’s ground war was spot on. Constituency division worked well and was the main reason there will be some clear blue water, likely around 10 seats, between it and Fianna Fáil.

The ground war, however, was badly let down by the “air war” of the national campaign. A successful national effort could have pushed the first preference vote share up by two to three per cent from the 25.5 per cent where it ended.

Ring was giving the first public airing to what TDs and candidates had been saying for weeks: the election was Fine Gael’s to lose and, while not as stunning a loss as it appeared on Saturday morning, a disappointing result was the outcome of a very poor campaign.

The faults had been evident for some time. With its promise to abolish the universal social charge (USC) and increase public spending, Fine Gael threw away its claim to prudence; and with the confusion over the “fiscal space” – largely caused by Michael Noonan, but compounded by Enda Kenny being unable to answer questions on the issue – it threw away its claim to competence.

Internal chatter within Fine Gael suggested its focus groups were too Dublin-focused, which would possibly explain its “Let’s keep the recovery going” slogan.

It went down like a lead balloon among many voters outside the capital, who had felt no material recovery in their own lives.

The blunt focus on what was widely criticised as an unaffordable tax cut, the USC abolition, was likely born of the scars of the 1997 general election, when the outgoing Fine Gael-Labour-Democratic Left coalition was outflanked by Bertie Ahern’s Fianna Fáil.

Back then, in contrast to the rainbow coalition’s complicated tax package, Ahern offered straight rate cuts and used them as a battering ram to power. The 2016 results, particularly outside Dublin, show that a crisis-scarred electorate is not as easily bribed as perhaps it once was.

The initial campaign designed by Fine Gael was said to be heavily economic, against an emphasis on public services.

As preparations for a November election intensified, Minister for Justice Frances Fitzgerald, in particular, was said to have argued that there was too much focus on dry economics and not enough on society.

She was supported by James Reilly, who has now lost his seat in Dublin Fingal. Fine Gael began to talk more about public services, particularly during and after its ardfheis in January.

Yet the election game plan did not change much at all between November and February and the drip feed of election promises in the intervening period gave again gave the impression of the party trying to buy the electorate, even if the proposals were all affordable within the resources expected to be available.

The prolonged period of “keeping the recovery going” also allowed voters more time to question whether they had felt the recovery at all, and perhaps created an impression of Fine Gael arrogance.

There was also a rigid belief that an electorate that did not love the Government but wanted economic security would eventually come back, as happened with Ahern’s Fianna Fáil in 2007, a presumption that again was misplaced in the Ireland of 2016.

The Fine Gael playbook was heavily influenced by David Cameron’s Conservative victory in last May’s UK general election, a victory that was built on tax cuts and a late swing to an unloved government because the opposition could not be trusted on the economy.

It also owed much to scare tactics, as the Tories won over England with warnings of a Labour government propped up by the Scottish Nationalists.

Voters did not buy the Fine Gael warnings, which grew ever louder as the campaign progressed, about stability and possible flights of capital should the result prove inconclusive.

As the campaign stuttered, the real shock for Fine Gael came when a mid-campaign opinion poll put it on 26 per cent.

Ministers had again been on to party headquarters voicing their growing concerns, with Fitzgerald again said to have been to the fore.

The message changed from keeping the recovery going to ensuring the recovery was felt by everyone, but there was no central, Phil Hogan type figure to grab the campaign by the throat went it was need. Party headquarters was, at times, said to be aimless.

Another complaint from TDs was that Fine Gael was over-prepared and tired when the campaign proper began and party sources admit that was true.

Needless mistakes, like Kenny’s disastrous “whingers” comment in the final weekend, should not have been made. That it took two days to clear up that particular mess again spoke to the lack of one strong, central figure directing what needed to be done in the campaign.

Having lost the air war, Fine Gael had to rely on its ground war to avoid complete catastrophe, but the bad national campaign means many seats have been left behind.

The new Fine Gael parliamentary party is expected to meet in the days ahead and TDs are likely to have questions for those they hold responsible.