Election 2016 will be ‘make or break’ for Renua 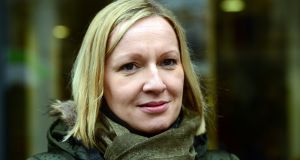 Renua leader Lucinda Creighton has said the general election will be ‘make or break’ for the party. File photograph: Cyril Byrne/The Irish Times

Renua leader Lucinda Creighton has said the general election will be “make or break” for the party.

Ms Creighton said the party is confident about the forthcoming vote and has set the target of securing 10 seats in the next Dáil.

She said the party has high expectations for the election and is eager to be in government.

Ms Creighton said: “We have been very consistent. We want to be part of the next government. Renua Ireland has a vision for the country.

“In our current political situation it is impossible to influence the direction from opposition.

“There are plenty of parties who make a career from and whose sole purpose is to be on the sidelines. That is not our agenda.”

Ms Creighton said it was the ambition of Renua to act as a watchdog in government.

She said the polls and the bookmakers believe it will be a Fianna Fáil-Fine Gael government.

She said that, in this case, Renua is needed in power to ensure the two parties do not repeat the mistakes of the past.

“If there is no watchdog in government to prevent against it, the developers and the bankers will be back inside the tent.

“There has been no new spatial strategy for planning in this country for over 14 years . . . [it] was replaced by relaxing planning regulations so that shovel-ready projects could be allowed to move forward.

“These are precisely the same mistakes we made in the past to meet growing housing demand, yet we are poised to make them all over again.”

The party is also proposing a new Fiscal Responsibility Bill, which would give the Irish Fiscal Advisory Council much greater powers .

Ms Creighton said: “These measures, and others, are necessary to ensure that the Irish people do not hand over the keys of the economy to the political establishment who are not listening, and have not learned from the mistakes of the past.”