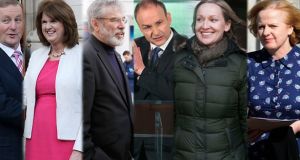 Mr Kenny, the Fine Gael leader, and the Labour leader, Tánaiste Joan Burton, both appealed for the outgoing Coalition to be returned to power when Dáil business resumes on March 10th.

As he arrived at the Áras to meet the President to dissolve the Dáil, Mr Kenny insisted it was not goodbye for Fine Gael and Labour. Ms Burton later said she was confident she would return as Tánaiste.

Fianna Fáil leader Micheál Martin insisted his party could be the largest in the State after the election, and that Fine Gael, which is widely expected to return the most candidates, was the “party of the wealthy”.

He said Fianna Fáil was offering a choice on the way to take the country forward.

The Anti Austerity Alliance-People Before Profit group said the housing crisis - including rising rental costs - would be “single biggest issue” during the campaign.

Ruth Coppinger and Paul Murphy of the AAA and Richard Boyd Barrett of PBP said the voters faced a real choice in the election.

“The prospect that we are putting in front of people is that we could have a real alternative in the next Dáil in terms of the Anti Austerity Alliance and People Before Profit,” Ms Coppinger. “A group of left, socialist TDs bringing the real concerns of working class people into the floor of the chamber every day.”

Sinn Féin leader Gerry Adams said Mr Kenny’s decision to call the election was probably the best one he had made since becoming Taoiseach.

Sinn Féin has signed up to the Right 2 Change policy principles, formulated after consultation with community groups, trade unionists, and independent politicians.

Mr Adams said he did not know how many seats Sinn Féin would win but was hoping for a increase on the current total of 14. “Any improvement on that would be a good day for us. A good day, if I may say so for the citizens of this State and of this island.”

Renua leader Lucinda Creighton said “vast sums of money” are being pumped into her Dublin Bay South constituency in an effort to prevent her re-election.

Ms Creighton said the party was a “political force to be reckoned with” and was targeting 10 seats in the general election.

“Our campaign will largely be run on adrenalin, enthusiasm and a passion for a better Ireland and I think for me that beats all the apparatus and the machinery of the established parties,” she said.

Ms Burton said the election would be a contest between hope and optimism offered by Labour and Fine Gael, or the opposition who portrayed Ireland as a “dark dull” place.

“That’s why they want to portray. Voters have a choice and thy are know going to have their supreme three weeks. It will be a very short election,” she said.

Ms Burton also confirmed Labour would commit to free GP care for all in its election manifesto.

Taoiseach Enda Kenny said voters have a clear choice ahead of them in the general election campaign. He said voters should not go back to political parties that wrecked the economy or those who could destroy the recovery.

Addressing Fine Gael party candidates on Wednesday afternoon Mr Kenny said now was not the time to gamble with a recovery that was still fragile.