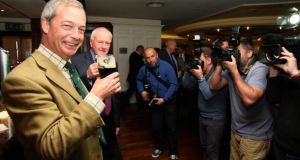 Ukip leader Nigel Farage was nearly denied his customary pint after campaigning in Belfast yesterday. When he arrived at the Europa Hotel in central Belfast in the morning, he was met by the party’s European election candidate in Northern Ireland, Henry Reilly; a selection of the party’s 22 local election candidates; several reporters, photographers and camera crews – and one protester. “People don’t want hatred and racism, Nigel,” the protester heckled – but it was a very quiet heckle.

It was going to be a hectic day: meeting the press, then off to the Balmoral Show on its new site near Lisburn with Reilly and the council candidates, then back for canvassing in Carrickfergus, east Belfast, and Bangor. Check-jacketed and check-shirted Farage would need his pint to sustain him, but would he get it? He was confidently adopting Brendan Behan’s dictum that there is no such thing as bad publicity. This was in the face of more negative front-page stories in yesterday’s London Times and Guardian.

The Times was exercised about the “scandal” of Ukip candidates having to divvy up a levy to the party – “cash for Euro seats” – if elected as MEPs. “I have read it three times; I have no idea what they are talking about . . . We expect our MEPs to make some sort of contribution towards the party,” he said. The Guardian report was a little trickier to dismiss as it again evoked the racism allegation against Ukip.

It told of how Asian London School of Economics student Sanya-Jeet Thandi (20), a “rising star” of Ukip, had resigned from the party because she believed it had “descended into a form of racist populism”. “I was a little bit surprised because this time last week she appeared on a national television debate, live, to defend Ukip’s policy and to say we had the least racist immigration policy of any party,” said Farage. He was sorry to lose her because “she is a very bright young kid”, but there were many other people from different ethnic backgrounds who were standing for Ukip or who supported the party.

“What about the figures at the weekend showing the dramatic progress Ukip is making with the black and minority ethnic vote – 16 per cent of that community is now voting Ukip, which is more than the Tories and Lib Dems added up together? . . . I think what people do see is an establishment that are really very, very worried about Ukip indeed, an establishment that . . . doesn’t like being challenged. I think most fair-minded people can see what’s going on.”

It’s fair to say that the vast majority of Ukip support in the North will come from the unionist side of the house. However could Farage anticipate any Northern nationalist voting for a Ukip candidate? “Why not?” he replies. “If he were a sincere nationalist, he would believe that the European Union is just about the worst thing that has ever happened to the Republic or to Northern Ireland. We’ve approached politics as a non-sectarian political party which would absolutely welcome Catholics as members and as activists and as voters,” he added.

After all the interviews and ahead of his pressing-the- flesh canvass tour, it was finally off for his restorative lunchtime pint.

The intention was to have the drink across the road in Belfast’s famous Victorian Crown Bar. The Crown said “No”; Ukip was told that filming would not be allowed. Of course, though, the Ukip leader got his pint and the photographers got their picture – and it was the bar in the Europa that lapped up the publicity as Farage, eschewing his normal English ale, sank a Murphy’s.

Cowen ‘surprised and disappointed’ after being sacked on the phone by Micheál Martin 07:17
Taoiseach dramatically sacks Barry Cowen as minister over drink-driving controversy 07:14
Covid-19: Overseas visitors are causing ‘stress and anxiety’ in some areas, TDs say 05:10
Three visitors investigated by Garda after refusing to fill in locator form 04:45
Irish peacekeeping veterans sue the State over ambush of convoy in Syria 03:01