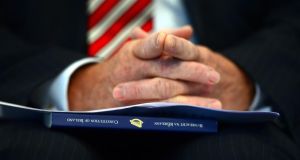 The Convention on the Constitution has voted to afford greater constitutional protection to economic, social and cultural (ESC) rights.

In the ninth and final meeting of the Convention 85 per cent of members voted in favour of strengthening these rights.

Earlier, barrister and former minister for Justice, Michael McDowell, argued against the proposition, saying it would diminish the power of the people.

The Convention, which was established by the Oireachtas in July 2012 to consider possible areas for reform of the Constitution, is made up of 100 members drawn from civil and political society and this weekend looked at whether ESC rights should be enumerated in the Constitution.

The members will vote on whether to recommend to the Oireachtas that a referendum should be put to the electorate on the issue.

Mr McDowell argued that Article 6 of the Constitution stated all powers to decide national policies derived ultimately from the people. He said this meant “all questions of national policy” should be decided by the people, in the Oireachtas. He said the judiciary was enormously powerful in Ireland, judicial decisions were immediately enforceable and so judicial powers were correctly “confined to the areas of civil and political rights and Constitutional rights” and not extended to economic or social rights.

“Do we want to devalue politics? Do we trust our politicians to deal with our obligations under the UN Conventions and the like; to provide the resources that are necessary; to make the decisions on the distribution of resources?,” he asked.

“In my view it is the essence of the integrity of the political process that we stand by it however imperfect it has been and that we don’t at this stage seek to say huge areas of public policy are henceforth to be determined by what judge says the Constitution says in those areas.”

“If you don’t know what the new article would contain and how it would guide a judge in how he should decide that issue then you are walking straight down the ‘Pro-Life amendment route’. “

Arguing in favour of the proposition Dr Mary Murphy, acting chair of the Irish Human Rights and Equality Commission, said the Commission would like to see “the totality of...human rights guaranteed in the Constitution”.

“Through our work...we see on a daily basis the experience and frustration of the public as thety attempt to vindicate their economic and social rights. We see the clear gap between what citizens want and the availability of straightforward Irish domestic mechanisms to vindicate these rights.”

She said fears that naming such rights in the Constitution would interfere with the powers of the Oireachtas were “unfounded”.

“In fact it can be argued that enumerated rights, democratically determined, limit judicial activism and clearly demarcate Government’s policy role. In fact enumerated rights can reinforce the separation of power.”

Dr Murphy also argued against a point raised by barrister Rossa Fanning who had said enumerating economic rights in the Constitution would remove the power of parliament to decide on how national resources should be allocated.

Colm O’Gorman, executive director of Amnesty International Ireland said 81 per cent of Irish people agreed public spending decisions should be based on human rights, according to a Red C poll the charity commissioned earlier this month.

“As the economy recovers we must consider how the fruits of that recovery are spent,” he said.