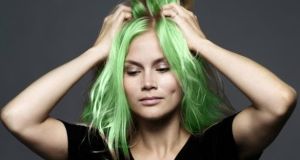 Women in a rural part of Co Cork have apparently seen their hair turn a green hue after washing it. File photograph: Getty Images

Blondes are having no fun in parts of north Cork as some claim their hair turns a green hue after after every wash due to an imbalance in the water supply.

A local salon has been inundated with frustrated people trying to get rid of the green tinged hair in Co Cork.

Kai Runovski, owner of the Red Door Beauty Salons, said she opened her salon in Dromahane almost a year ago.

“It wasn’t long until we noticed lots of people coming in that had this green hue in their hair. We were surprised there was so many,” she said.

“Women just wanted to get rid of the colour. It is a big problem.”

Ms Runovski said with blonde and grey hair the colour was a “mucky, green shade” and in brunettes a more “forest” green.

Initially, she was concerned the issue might be connected to the salon’s colouring products and hired a colour technician.

“She told me the water had very high iron levels and was very acidic, and that was causing it. It’s not just here, you can find places like that in west Cork and in Kerry,” she said.

“It was a shock in the beginning. We’ve learned to buy big gallons of alkaline shampoo all stored in the basement. It’s up to us to find a colour to hide the green.”

The problem came to the attention of Mayor of Co Cork John Paul O’Shea after a number of complaints.

Mr O’Shea said the pH levels of the water were too high, which also caused corrosion in household appliances and showers.

He said he brought the issue to the attention of council engineers and agreed a €40,000 upgrade of the local water treatment plant that should fix the problem.

1:44 'Harvey Weinstein is exactly where he should be'