“I know that my roots are in Waterford but I also know that I have so much more to uncover,” reporter tells gathering 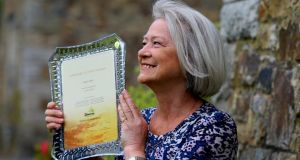 Kate Adie after she was presented with a certificate of Irish heritage at a special Waterford Gathering ceremony held in Waterford Castle. Photograph: Patrick Browne

Former BBC Chief News Correspondent, Kate Adie yesterday spoke of her pride at being presented with a Certificate of Irish Heritage in recognition of her paternal links with Waterford.

Adie whose father, John Kelly hailed from Waterford, was presented with the certificate by the Waterford Gathering in partnership with the Certificate of Irish Heritage.

“I’m immensely proud of my Irish heritage and this recognition from the people of Waterford is of great importance to me,” said Adie who presented with the certificate by the Mayors of Waterford City and County respectively, Cllr Jim D’Arcy and Cllr Billy Kyne.

“I know that my roots are in Waterford but I also know that I have so much more to uncover - I look forward to learning more about the city and county and the family,” she added at the presentation at Waterford Castle attended by Jim Miley, Director of Gathering Ireland.

Earlier Adie told the Pat Kenny Show on RTÉ that she had been trying to trace her father who had a brief liaison with her mother, Babe Dunnett in Lincolnshire in 1944 when Ms Dunnett’s husband and her stepfather was serving as an army medic in World War II.

“My mother had a whirlwind romance with a man from Waterford and I was the result,” said Adie who was put for up adoption by her birth mother soon after her birth and adopted by Sunderland couple, Wilfred and Maude Adie.

“They worked for an engineering firm in Stamford - they were a little older than my mother, she was 25 and they were in their early 30s - they had travelled from Waterford and they were both dark haired, full of fun, lively lively men,” she told Pat Kenny.

Some schools missing up to 10 teachers over wait for Covid-19 test result – ASTI 09:20
Drogheda in the driving seat as First Division reaches a thrilling finale 09:06
LA Rams see off Chicago Bears in a battle of the defences 08:45
Asian shares slip as surging Covid cases weigh on global economy 08:35
At least seven dead, more than 80 wounded in bomb blast at Pakistani seminary 08:26