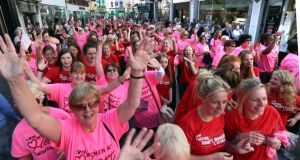 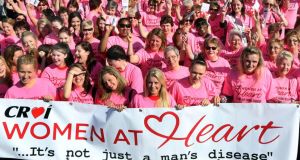 Heart disease is a feminist issue, because women are far more at risk than commonly perceived, according to a new campaign.

Women in Ireland have a 50 per cent chance of dying of a heart attack or stroke, but could reduce their mortality risk factor by 35 per cent through regular exercise.

Women are also seven times more likely to die of cardiovascular disease than breast cancer, but are presenting later, and with symptoms which can differ from those in men, Galway Clinic consultant cardiologist Dr Blaithnead Murtagh has said.

Dr Murtagh was speaking on the eve of a “red alert” campaign initiated by west of Ireland cardiology foundation Croí, which will involve free blood pressure and pulse checks for women only tomorrow at its new heart and stroke centre in Newcastle, Galway.

There is still the perception that men are more at risk of a cardiovascular illness than women, Dr Murtagh said.

“Yet young women in their 40s and 50s who are smoking will have a heart attack a lot quicker, and worldwide the incidence of heart attacks is increasing within this grouping. Women tend to go to casualty a bit later and are often not seen as soon as they should be, as symptoms may be different to the acknowledged alerts in men.

“Women can have chest pain, but they may also present with no chest pains, but with breathlessness, indigestion, nausea, throat, back or neck pain, palpitations and some anxiety,” she said.

Exercise in the form of a 30- minute brisk walk five days a week, where one should feel “a bit of pressure”, can make the difference in reducing the mortality rate, she said.

The Croí “red alert” campaign in the lead-up to World Heart Day next Sunday aims to alert women to common misconceptions and myths about heart disease. Almost 5,000 Irish women die from cardiovascular disease each year.

The charity is inviting women of all ages to a free public talk by Dr Murtagh in the Croí Heart & Stroke Centre, Newcastle, Galway tomorrow at 8pm, and it is offering free blood pressure and pulse checks for women only from 2pm to 7.30pm at the centre. See croi.ie.