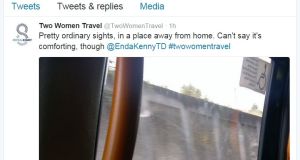 A tweet from the @twowomentravel account, which is documenting a woman’s journey to the UK to have an abortion. Photograph: Screenshot/@twotwomentravel/Twitter

An Irish woman is live-tweeting her journey to the UK to have an abortion.

She is accompanied by a second woman and both are documenting the journey via the twitter account @twowomentravel.

The twitter bio reads: “Two Women, one procedure, 48 hours away from home.”

Before setting out on Saturday morning, the pair directed a tweet to Enda Kenny: “Good morning all .Thanks for all of the messages of solidarity and support.Thanks to @EndaKennyTD we’re about to hit the road.”

The women arrived to Dublin Airport at about 5am and later boarded a plane, according to a tweet with an accompanying picture of the aircraft on the runway.

While on the plane, the account tweeted a photo of a card which read: “We make this journey in stern solidarity with all our Irish sisters who have gone before us.”

The two women arrived at their destination, tweeting a photograph of the view through their taxi cab window. “Pretty ordinary sights, in a place away from home. Can’t say it’s comforting, though,” the tweet reads.

In one of the updates, the women appear to be at the clinic: “Now a waiting room, weighted by bated breaths. @EndaKennyTD we could be home by noon in another world.”

It was added some hours later that the abortion had taken place and the patient was “out and safe”, and that those behind the account had encountered other Irish women while waiting for the procedure.

The account which appears to have been set up on Friday now has over 12,000 followers, and has attracted a flurry of interest on Twitter using the #twowomentravel.

US and UK television star James Corden tweeted this morning: “Today, @TwoWomenTravel but you’re not on your own in this. So many people are with you. X”.

Their journey has also attracted commentary from Sinn Féin’s health spokeswoman Louise O’Reilly and Senator Lynn Ruane, along with the National Women’s Council of Ireland which tweeted: “#twowomentravel proves restrictive abortion laws don’t stop abortion, but do cause immense hardship for women who must travel #repealthe8th”.

Most tweets are directed at the Taoiseach, who has not responded on social media or publicly as yet.

The women involved have not yet responded to queries from The Irish Times about where exactly they have travelled to or if they have any affiliation to political or social justice movements in Ireland.

The account’s icon is a sign reading “Repeal 8” in reference to the Eighth Amendment of the Constitution which guarantees the equal right to life of the unborn and mother.

Figures released by the UK government show that nearly 3,500 women with Irish addresses travelled to England and Wales for an abortion in 2014.