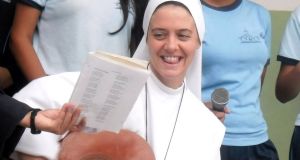 Sr Clare Theresa Crockett, from Derry, who was teaching guitar at the school when the earthquake struck. Photograph: Home of the Mother/PA Wire

An Irish nun was killed in Ecuador as she attempted to bring others to safety from a school damaged after an earthquake hit the country on Sunday.

Tributes were paid yesterday to Sr Clare Theresa Crockett (33), who was originally from the Brandywell area of Derry. She was remembered by a relative as the “superstar of the family”.

Sr Clare and five postulants are understood to have died when the stairway of the school collapsed in Playa Prieta.

A relative, who did not wish to be named, said Sr Clare was involved in the religious life since she was 18, working in Spain, Italy and the US before moving to Ecuador.

“We heard late on Sunday night that she was killed in the earthquake. The family are devastated,” the relative said.

“We heard that she was teaching guitar in the school when the building collapsed due to the earthquake. We were told she was trying to get people out of the school when it collapsed. Clare was the superstar of the family; we are all really proud of her.”

Sr Clare, who is survived by parents Margaret and Gerard and sisters Shauna and Megan, was based in the Home of the Mother Order school in Playa Prieta. She was one of about 350 people killed in the earthquake whose magnitude was 7.8 on the Richter scale.

The Department of Foreign Affairs is currently liaising with the Crockett family.

Minister for Foreign Affairs Charlie Flanagan offered his condolences to the Crocketts.

“The tributes paid to Sr Crockett since the weekend are a testament to the difference she made to the lives of the community she served,” he said.

“The terrible news has devastated everyone in the last couple of hours. This is a young girl who gave her life to God and died for the gospel,” he said.

“She was a joyful girl. I’ve known her since she was a teenager. A beautiful person.”

He said Sr Clare’s dedication to her vocation was such that “she came home only on rare occasions, but when she did they were marvellously happy family occasions”.

“I always told her she was a joy on two feet and I will remember her as someone who was totally committed to her faith and to her religious Order,” he said.

Sr Clare’s former teacher in St Cecilia’s College, Kathleen Gormley, said she found it difficult to take in the news that her former pupil had died in the Ecuadorian earthquake.

“I can still see her in her green school uniform playing the guitar. She loved music,” she said. “It is so sad when someone dies in such circumstances but it is sadder when it is a lovely young woman with so much to offer to so many. She was such a popular student in St Cecilia’s.”