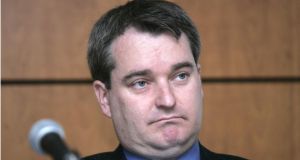 Robert Watt, secretary general of the Department of Public Expenditure and Reform, said the Government would face demographic and budgetary pressures in the years ahead and that reform was always going to be necessary. Photograph: Dara Mac Dónaill/The Irish Times.

Public service staff will have to continue to implement work practice reforms and improve productivity in the future, one of the country’s most senior civil servants had said.

Robert Watt, secretary general of the Department of Public Expenditure and Reform, said the Government would face demographic and budgetary pressures in the years ahead and that reform was always going to be necessary.

Mr Watt was speaking on Wednesday at the launch of new research on public attitudes towards the Civil Service.

He said every organisation in the public or private sector had to keep changing and deliver more for its customers.

Mr Watt said that while the economy was improving, “we are going to have tight budgets and we will have to deliver more with the same or more with less”.

A number of trade unions have warned they will oppose the introduction of new productivity measures in return for pay restoration. They have also urged the repeal of productivity measures such as a longer working week which were put in place as part of the Croke Park and Haddington Road agreements.

This issue is likely to feature highly at the annual conference this week of union representing nurses and low- paid civil servants.

The new research found that overall satisfaction levels remained strong at over 75 per cent with the Civil Service in terms of service delivery and outcomes.

However it found that one in five people did not perceive the Civil Service as trustworthy and would question whether people were dealt with fairly.

The study found the telephone continued to be the most common method by which the public contacted the Civil Service although people complained that the process was slow and about being put on to automatic voice messages.

Mr Watt said he wanted more people to use online channels. He acknowledged that running phone systems was expensive.

Mr Watt also said he was concerned at the age profile of civil servants. He said the median age was now 47 or 48. However he said recruitment was again underway again , particularly in areas where there was a skills shortage. He said there would be no return to the era of 39,000 staff in the Civil Service.