Crew of 56 returns to Haulbowline, Co Cork after rescuing more than 4,000 people 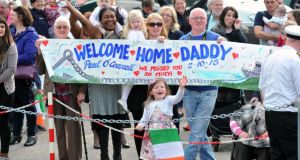 Crew member Paul O’Connell’s family with daughter Leah in the foreground pictured on the LÉ Niamh’s return from humanitarian and search-and-rescue operations in the Mediterranean, to Haulbowline Naval Base, Cork. Photograph Daragh McSweeney/Provision 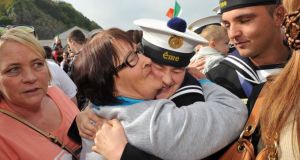 Able Comms Shauna Ferro gets a hug from mother Catherine on the LÉ Niamh’s return to Haulbowline Naval Base, Cork after humanitarian and search-and-rescue operations in the Mediterranean. Photograph: Daragh McSweeney/Provision 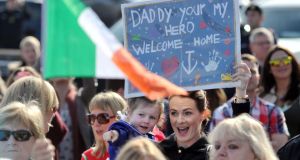 An army medic who helped deliver a baby on board the LE Niamh in the middle of the Mediterranean sea on Friday spoke of his immense pride at being involved in the first delivery on an Irish Naval vessel.

Corporal Conor Kilbride from Swords, Co Dublin was among the 56 crew members on board the LE Niamh who returned to Haulbowline in Co Cork on Friday. They had rescued over 4,000 migrants and refugees in their twelve week humanitarian search and rescue mission in the Mediterranean.

Cpl Kilbride cut the cord to deliver baby Destiny just a week in to the search and rescue operation in July. He said it was an unforgettable moment for him and leading medic Paul O’Connell.

“Outstanding it was. It was one of the proudest moments of my life. We didn’t realise that she was that heavily pregnant. We got the report from the other ship that she was only eight months pregnant and when she got on board she told us she was nine months.

“We kept an eye on her. She came to us saying she had pains. Later that day she said she felt contractions. Within twenty five minutes baby Destiny was born. We didn’t have time to think. Before we knew it there she was out on the deck.”

Cpl Kilbride said Destiny was born “lovely and healthy.” Destiny and her mother Grace were subsequently transferred to an Italian hospital and he is hoping to receive an update on her in the coming weeks.

He said it was traumatic to see so many desperate individuals losing their lives at sea and that the crew were grateful for the assistance of social workers to “have a weep” with them.

They weren’t the only crew-members who helped a baby. Seaman Alex Casey also managed to resuscitate an unresponsive infant who had been rescued by the LE Niamh.

He carried out CPR on the baby and she started to breathe again but he had a moment of panic when she subsequently became unresponsive for a second time.

“I revived her again with CPR. Gladly she came back. I don’t think we are heroes. We are happy to be able to do it in a professional manner. At the time adrenaline took over. After I had time to reflect I was glad that my training kicking in. I was glad to be able to give her a lease of life.”

Commanded by Lieutenant Commander Daniel Wall the sailors augmented by two medics from the Army Medical Corps, were deployed on July 10th.

Lt Cmdr Wall said it was a “fantastic feeling” to save over 4,000 lives. He said the full blown crisis in the Mediterranean made him feel privileged to come from such a stable country as Ireland.

“I have a feeling of joy and a job well done. Pride in my crew and just happiness at being home to spend time with my wife and my kid. My crew coped very well and I am very proud of what they achieved.”

Defence Forces chief of staff, Vice-Admiral Mark Mellet, said the families had every right to be proud of what their loved ones had achieved.

“In the course of doing their job they have seen things that no-one should have to witness.”

Hundreds of relatives gathered at the quayside in Haulbowline amid emotional scenes.

Leigh Murphy from Limerick had a big banner with the words “Dave – Your Lady Needs Kisses” as she awaited the return of LE Niamh crew member Dave O’Brien.

Ms Murphy said she was looking forward to introducing Dave to his three week old niece Elijean. “Dave said the mission has been challenging but it is very rewarding. To have the support of the country behind him is amazing. I want a kiss. It has been lonely. I can’t wait for a kiss and a cuddle and Dave getting to meet his niece for the first time.”

Liz Coughlan from Cobh, Co Cork was waiting for her partner Joseph Brennan along with their seven year old son Luke. She said it was a “huge worry” to have him involved in such a difficult mission.

“It was upsetting. He (Joseph) wouldn’t really open up but you would know he was upset. I just want to get him home to party with him. It was hard and worrying. I can’t wait to have him back.”

The LE Samuel Beckett has replaced the LE Niamh in the Mediterranean and will continue to provide assistance to persons in distress at sea. To date, both LE Eithne and LE Niamh have helped rescue almost 7,000 people.