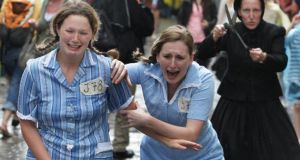 The chase is on .... Noelle Kielty and Michalle Simon are chased by Catherine Simon through the streets og Galway city cntre yesterday during the Galway Fringe Festival. They were performing part of Drama Works Ireland production of Chidren of the Black Skirt. Photograph: Joe O'Shaughnessy.

Hansel and Gretel in the courthouse, a burlesque cabaret in a bar, tributes to writer Patrick Kavanagh and the lampooning blasphemy of Nobel laureate Dario Fo – such is the flavour of the second Galway Fringe Festival which continues this week.

For director Claire Keegan it has been both challenging and exhilarating as she has juggled management of 32 theatre shows with comedy, art, music, dance, children’s theatre, literary readings and workshops on a recession-proof budget.

Securing Galway courthouse as a venue for the first time has been one of her many achievements this year, for Dhá Laimh theatre’s “postmodern” Hansel and Gretel take on a city jail.

She has also strived to accommodate local and international artists from Malawi, Galicia, the US and Canada. Several US companies have stopped off en route to the Edinburgh Fringe, while Culture Ireland sponsored the programming of two visiting theatre groups. One of those, Nanzikambe Arts of Malawi, is staging a one-man African version of Dario Fo’s 1978 classic A Tale of a Tiger, inspired by a Chinese folktale. “Having the tiger” in China means resisting when others are giving up, and Geoffrey Mbene’s interpretation relates to the Malawian opposition protests of July 2011.

Nine plays were written by students in the university, which is providing a venue, the Cube Theatre. Other key venues around town include the Townhouse and Bentley bars, where “almost curated” productions are running daily.

For the first time, the fringe has also moved west of the city, securing three south Connemara venues, including Carraroe library for Galician music, poetry, storytelling, dance and literature. “One of the big surprises for us was the number of up-and-coming bands we attracted,” says Keegan. “David Boland of Citóg Music has helped us to co-ordinate showcase music events, while night life photography is being provided by Slovakian journalist Darius Ivan, publisher of the new magazine Craic.”

Cheap tickets
The fringe has received no Arts Council funding, although it appealed its refusal. It has a policy of keeping ticket prices at €5-10, with some exceptions, while exhibitions are free. “There are 42 other fringe festivals around the world, and we are a part of that network now,”says Keegan, who formerly worked with Punchbag and Dublin’s Focus Theatre.

“We are going to the World Fringe Congress in Edinburgh, and we are already planning for next year. We have a great relationship with Galway Arts Festival. and we are here to stay.”