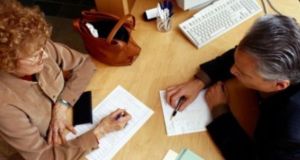 The levels of pay on offer to people entering the public service is not hampering the State’s ability to recruit high-calibre staff, the secretary general of the Department of Public Expenditure and Reform has said.

Robert Watt also indicated that the Government wants to stick with the Lansdowne Road agreement on public service pay which is scheduled to run until 2018.

His comments come after Workplace Relations Commission chief executive Kieran Mulvey said the pact should be “revisited” if teachers, gardaí or nurses struggle to be recruited because of low-entry pay.

He said the amount of money paid to entry-grade levels for the professions was “a problem that comes back to bite you after a while”.

Mr Watt said the Lansdowne Road deal provided for pay increases for public service personnel which were not out of line with those being awarded to private sector workers.

Clerical officers in the Civil Service would see their pay rise by 9 per cent over the period of the Lansdowne Road agreement, gardaí by 8.5 per cent, nurses by 7.5 per cent and teachers by 7 per cent, he said.

Mr Watt said about €900 million was being allocated to pay for the Lansdowne Road accord and that any further increases would mean there was less money available for areas such as health, social protection and capital projects.

Teacher, nurse and Garda representatives have been calling for increased pay provisions and the end of two-tier salary arrangements for certain employees.

Mr Watt said there were no plans to look again at cuts to public service allowances introduced in 2012.

Teaching unions last week highlighted the abolition of a qualification allowance worth up €6,000 for those hired after 2012 as being one of the main contributors to a two-tier pay system in the profession.

He said the public service was offering “attractive” rates and any discussion about starting salaries had to have regard to market realities.

The starting salary for a nurse was €33,000 per year including premium payments and overtime; the entry rate for a teacher on full hours €30,702, an administrative officer in the Civil Service €30,000 and a Garda €31,000 after one year.

He maintained there had been 46,000 applications for entry-grade positions in the Civil Service.

He said in January 2014 about 25,000 people had applied for 550 positions when Garda recruitment recommenced.

He said a subsequent competition received more than 16,000 applications.

He said that under existing pay arrangements, there had been a net increase of 9,800 in the number of staff appointed in the public service between January 2014 and December 2015.