First Minister: ‘I want to see these people behind bars. No place for masked men’ in NI 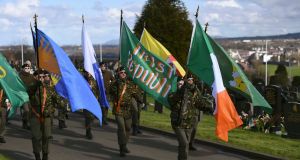 Members of the 32 County Sovereignty Movement on parade in Creggan Cemetery during a centenary commemoration of the 1916 Easter Rising in Derry, Easter Monday 2016. Photograph: Clodagh Kilcoyne/Reuters 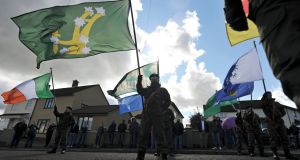 A Plough and the Stars flag flies at a 32 County Sovereignty Movement parade on Easter Monday at Creggan Cemetery, Derry for a commemoration of the centenary of the 1916 Rising. Photograph: Clodagh Kilcoyne/Reuters 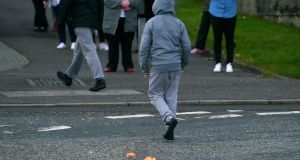 A boy walks away after throwing a petrol bomb ahead of a 32 County Sovereignty Movement parade in Derry, Easter Monday, 2016. Photograph: Clodagh Kilcoyne/Reuters

Police in Northern Ireland are investigating a number of suspected breaches of parading legislation by dissident republicans following the weekend of events marking the centenary of the Easter Rising.

The PSNI said it has gathered evidence in relation to parades over recent days in Derry City; in Lurgan, Co Armagh; in Coalisland, Co Tyrone; and Ardoyne in north Belfast.

Assistant chief constable Stephen Martin said reports would be forwarded to the North’s Public Prosecution Service “with a view to holding individuals accountable”.

About 150 people participated in a parade in Derry on Easter Monday organised by the 32 County Sovereignty Movement, which was linked to the Real IRA - now subsumed into the “New IRA”.

Some missiles and a petrol bomb, which did not explode, were hurled at police Land Rovers during the Derry event.

Northern Ireland’s First Minister Arlene Foster said she had contacted Mr Martin about the violence and the alleged illegal parades.

“I want to see these people behind bars. No place for masked men in Northern Ireland. Police assure me that evidence has been gathered,” Ms Foster said in a tweet on Monday.

Mr Martin said: “In policing all events over the Easter weekend, our overriding desire is to ensure that commemorative occasions, parades and protests pass off lawfully and peacefully.

“Our focus is on keeping communities safe, and our job, with a few notable exceptions, has been made that much easier because of the responsible attitude of all parties concerned.”