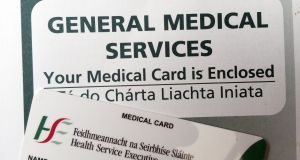 The auditors have called for regular, random reviews of all categories of medical cards, yearly reviews of cards issued on a self-assessment basis and a formal protocol for the issuing of discretionary cards.

A series of strict checks on the eligibility of people for medical cards has been proposed by the HSE’s internal auditors, just two years after the mass culling of cards proved so disastrous for the Government.

The auditors have called for regular, random reviews of all categories of medical cards, yearly reviews of cards issued on a self-assessment basis and a formal protocol for the issuing of discretionary cards.

However, the HSE has responded that risk in the area is “fully managed” and hundreds of cards are reviewed each month. It has also rejected a call by the auditors for a value-for-money review of the central medical card processing facility, saying it has been reviewed seven times in recent years.

Numerous instances of waste and overspending are highlighted in a series of reports from the internal auditors released yesterday.

The group received €3.215 million in funding from the HSE between 2005 and 2014, 90 per cent of which was spent on overseas trips, weekends away, dining, expenses of the organisation’s executive committee members and directors as well as complementary/beauty therapies and legal costs.

The auditors found Transfusion Positive delegates spent at least €3,052 on alcohol while attending international liver conferences and while dining and attending weekends away in Ireland. The report says “the purchase of alcohol is not an acceptable use of public funds”.

Another report criticises “persistent over-claiming” of travel allowances by staff at Sligo Regional Hospital and recommended a review of the claims made by four employees over a two-year period.

In one instance, a member of staff claimed for travelling 448 kilometres from Sligo to Galway and back, when the distance involved was at most 280 kilometres, the auditors found.

At University Hospital Limerick, a hospital consultant claimed for 17 days worth of callout payments on dates where the doctor was not on the roster for callout duty.

Cumulative overpayments to HSE staff across the State amounted to €4.65 million in August 2014, and debts of €275,000 were written off, according to the auditors.

In a further report, no evidence was found of Garda vetting for more than 60 per cent of GPs receiving State payments in the southeast.

Social Democrats to abstain on all votes for taoiseach as Dáil resumes 12:13
Explosive device found outside Martin Finucane’s home 11:51
Woman arrested over alleged threats to victim of rape 11:26
The 33rd Dáil convenes today: What can we expect? 11:25
Drug-taking caused death of student at Co Cork music festival, inquest hears 11:06