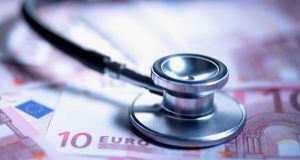 The 86-page draft White Paper on UHI, drawn up by Minister for Health James Reilly, would require everyone in the country to be insured at least for a standard level of cover by one of a number of competing insurance companies.


People who refuse to purchase mandatory cover for a basic package of health benefits would have the costs deducted from their earnings or benefits under confidential Government proposals for its new system of universal health insurance (UHI).

The plan aims to completely transform the provision of healthcare in Ireland.

The 86-page draft White Paper on UHI, drawn up by Minister for Health James Reilly, would require everyone in the country to be insured at least for a standard level of cover by one of a number of competing insurance companies.


Supplementary cover
The proposals would also permit people to buy supplementary health cover for items not covered by the standard package, such as private rooms in hospitals.

However, unlike the tradition system of community rating – where everyone pays the same regardless of age – supplementary health insurance for private facilities and other items outside the standard package would be risk rated. This means that the cost could increase as the subscriber got older.

The Irish Times reported last weekend that the Department of Public Expenditure and Reform had argued that the proposals were unaffordable and had suggested the standard package could cost over €1,600.

This was flatly rejected by the Department of Health.

The draft document – dated February 18th and marked confidential – will be considered by the Cabinet subcommittee on health next Monday. Under the proposals, the State would pay for the standard basket of benefits for lower income groups and fund subsidies for others.

It says where a person fails to purchase a UHI policy, the State will do so on their behalf and “recoup the cost at source, where appropriate, from the individual’s income or benefits” .

The proposed consultation process will also include debate on a “values framework” which would ask, for example, “should all life-saving treatments be considered essential or should quality of life and life expectancy be taken into account”.

The State would also pay for some other elements of healthcare not included in the standard package, such as long-term residential care, immunisations, ambulance services and care in hospital emergency departments.