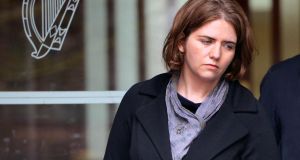 Dr Deirbhile Keady, consultant microbiologist, after giving evidence at the inquest into the death of Savita Halappanavar in Galway yesterday. Photograph: Eric Luke


A three-hour delay in transferring blood samples from Savita Halappanavar to the laboratory for analysis had no impact on the course of her infection, the inquest into her death has heard.

The samples, which showed evidence of severe infection, were taken at 7am on Wednesday, October 24th last but were not received by the microbiology lab at Galway University Hospital until 10.12am, records show.

At the inquest into Ms Halappanavar’s death, consultant microbiologist Dr Deirbhile Keady was repeatedly questioned by lawyers for the dead woman’s husband, Praveen Halappanavar, as to why it took so long to transfer the samples to the lab.

She agreed with Eugene Gleeson SC, for Mr Halappanavar, that the sooner a sample was analysed the better for the patient.

However, she said antibiotic treatment was started as soon as infection was suspected at lunchtime that Wednesday. Ms Halappanavar was on the appropriate antibiotics and subsequent tests showed that they were effective in clearing all bacteria from her system, she said. She said she was unaware of what had happened to the bloods between the time they were taken and arrival in the lab.


Infection
The tests showed that Ms Halappanavar was infected with an E.Coli ESBL (extended spectrum beta lactamase), which is particularly difficult to treat with antibiotics.

After Ms Halappanavar's death, the hospital had reviewed its files and found that this was the only such case in a four-year period.

Dr Keady said she had no information about the transfer of the blood culture samples from the ward to the microbiology lab.

Galway West Coroner Dr Ciaran MacLoughlin asked the witness if she considered the first antibiotic prescribed for Ms Halappanavar the previous Monday – Erythromycin at four times a day – an adequate dose for an adult.

Dr Keady said the use of this antibiotic as a prophylactic was not part of the microbiological guidelines in an obstetric setting. As a result, she was not familiar with the dose required.

She said it took up to 48 hours to obtain full results from the blood culture samples taken from Ms Halappanavar on the Wednesday. By the Thursday morning, they had an idea that E Coli was involved and full identification followed the next day.