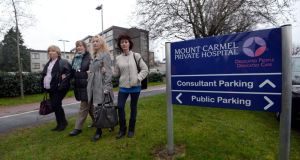 It was a landmark deal of the boom. In July 2006, Kildare developer Gerry Conlan beat all others with a knock-out €50 million bid to buy Mount Carmel Hospital in Churchtown, south Dublin. The Little Company of Mary Sisters, the religious order which founded the hospital in 1949, cashed out and used the money to help its ageing members. Sr Celine Bourke, its province leader, said she was “delighted”.

Conlan was immensely wealthy. After a decade of building up a 308-acre landbank in Naas, Co Kildare, known as Millennium Park, Conlan, with his then business partner Dermot O’Rourke, sold the lot on for €315 million.

Conlan knew he had done well. He decided to diversify into healthcare and property in the US while still dabbling in development back home.

Since 2001, Conlan had been interested in hospitals and, by the time he got Mount Carmel, he owned two other small ones – Aut Even in Kilkenny and St Joseph’s in Sligo.

Harney’s new dawn
At the time, Mary Harney, the then minister for health, was predicting a new dawn for private healthcare which would shake up the public services. Conlan, like other developers such as Bernard McNamara and Paddy Shovlin, wanted in. After buying Mount Carmel, he poured millions into an attempt to build private hospitals alongside their public counterparts.

At the same time in 2007, Conlan spent €80 million buying office blocks in Boston with a loan from Anglo Irish Bank. The US became part of his plan and he spent $4 million on a 7,000sq ft house in Rhode Island and snapped up land which used to be a yacht yard.

Back home it was all go. In Brittas Bay, Co Wicklow, he planned a €100 million tourism resort while, near the seaside town of Tramore in Waterford, he planned a golf resort designed by Jack Nicklaus.

Just as the money had come pouring in, it was going out again. Conlan was dangerously overexposed to debt.

The financial crisis shook the foundations of Irish banking and Conlan was one of 10 clients of Anglo Irish Bank asked to borrow about €45 million each to buy shares in the bank formerly owned by Seán Quinn. Suddenly, it all began to go wrong.

Conlan’s plan to invest €30 million more in Mount Carmel was put on hold. His hospital group defaulted on loans, by now €65 million, to AIB in 2009. He owed €20 million more to KBC relating to his smaller hospitals. In 2010, the National Asset Management Agency took over all his loans owed to Irish banks, taking the Mount Carmel Hospital into its control. Over the next two years, Nama supported the hospital with loans of over €8 million, hoping it would be able to sell it on.


Hospital for sale
Conlan was edged out of the day-to-day running of the hospital and was told by Nama to focus on selling his other assets. In January 2013, Nama appointed Goodbody Stockbrokers to go through the hospital’s books and prepare the documents to sell it. In April it was put on the market.

At first there were 49 potential bidders, including the Mater Private and the University of Pittsburgh Medical Centre which owns the Beacon Hospital in Sandyford. Twenty nine of these bids were serious and they signed non-disclosure agreements to be allowed look under the hospital’s bonnet.

Most recoiled when they realised the hospital required an investment of at least €10 million in a country in recession with a declining birth rate. Only five bidders proceeded to the next round and, in the end, only one bid was made – by Centric Healthcare, led by Dr Ray Power and Maurice Cox.

Initially, Centric was prepared to pay €9 million; it hoped to do a deal with St James’s Hospital to allow its consultants to treat private patients there. But then it realised the investment required. It was also worried as the number of people with health insurance kept shrinking. It asked for Nama to accept staged, performance-related payments with only €2 million put upfront. Nama didn’t like the deal. It wanted to protect jobs but it also knew Mount Carmel’s five-acre site was inherently valuable.

A second bidder then emerged, led by financier Fergal Mulchrone and backed by the Barry Investment Management Company, a vehicle for Tony Barry of Barry’s Tea. The new bid was also conditional.

Nama turned to the State to ask if it wanted to take over the hospital. The Department of Health said no. Deliveries in Mount Carmel had been over 2,000 babies in 2008 but fell to 1,050 last year, a decline the State did not think could be reversed.

The board of directors told Nama it needed €940,000 to pay the bills and keep going. This month the decision was taken by Nama to pull the plug. “It was good money after bad, I am not surprised they ran out of patience,” a source said.

Centric is believed to have run through the numbers again but could not make them stack up. Yesterday, Mount Carmel was put into liquidation. Next week a receiver will be appointed to sell its property assets. The site is attractive for houses.

It is possible Centric or another healthcare bidder may try to keep the hospital open but the door is almost closed. Nama has set aside money to pay staff until the end of the month and refund deposits to patients.

A spokesperson for the HSE ruled out taking over Mount Carmel. “The birth rate is declining and it doesn’t tie in with the HSE plan for maternity services to have a standalone maternity hospital.”

The HSE spokesman said its officials had met the liquidator yesterday evening and its priority was to ensure patients were looked after. Contacted yesterday, Conlan said: “It has all happened really fast. I am very sorry but I can’t comment.” Sixty-five years after it started, Mount Carmel teeters on the brink of extinction.