Review of report that made corruption finding against Burke 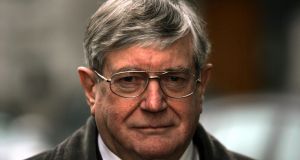 The planning tribunal says it is reviewing its landmark 2002 report that made corruption findings against former Fianna Fáil minister Ray Burke and his associates.

The tribunal has refused to say whether the corruption findings against Mr Burke and others are being dropped.

However, it has admitted that changes have been made to an earlier statement that said adverse findings against Mr Burke and six others would not be withdrawn.

Tribunal solicitor Susan Gilvarry told The Irish Times a “small number of names” have been removed from a statement which was posted on the tribunal’s website last January “pending a final decision following on from the tribunal’s current review”.

“As previously indicated it is expected that this review will be completed by the end of this year whereupon the [second and third interim] reports will again be posted on the tribunal website. A further statement will be posted at that time,” Ms Gilvarry said in a statement.

The tribunal’s second interim report was based on allegations made by whistleblower James Gogarty against Mr Burke and others, while the third report dealt with allegations, again based on Mr Gogarty’s claims, against former assistant city and county manager George Redmond.

Last January, The Irish Times reported that findings of corruption against Mr Burke had been withdrawn by the tribunal. Within days, the tribunal chairman, Judge Alan Mahon, issued a lengthy “information statement” denying this was the case and defending the actions of his predecessor, Mr Justice Feargus Flood. Ten months on, however, amended versions of the reports have still not been restored to the tribunal’s website.

In early October, Judge Mahon’s statement was altered by the removal of certain names, and at the weekend the media again reported, this time in The Sunday Times, that corruption charges against Mr Burke had been dropped.

Some of the corruption findings against Mr Burke in the second report were not based on Mr Gogarty’s allegations.

The current moves have no impact on the findings made in the tribunal’s fourth and final report, which dealt with the finances of former taoiseach Bertie Ahern, but he is likely to be studying developments with interest.