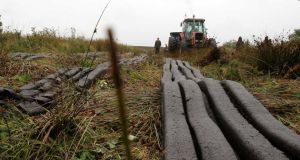 The Government has failed to follow through on promises to the European Commission to end turf-cutting on protected bogs, according to Friends of the Irish Environment (FIE).

The statement comes after turf-cutters in the west estimated that more than 30 of the 53 raised bogs where harvesting is banned have been cut so far this summer in defiance of the EU habitats directive.

“The legislation passed in 2011 to tighten controls seems to be forgotten. Cutting continues unhindered on bog after bog,” FIE said. “With European Court fines procedurally far in the distance, there appears to be no political will to bring the damage to an end.”

The environmental lobby group said two gardaí were “stationed 24 hours a day for the last seven weeks” at Clonmoylan and Barroughter bogs in Co Galway. “But when the machines arrived to work through the night last Friday, they stood idly by,” it claimed.

“What game is the State playing at taking valuable guards’ time for window dressing while the destruction of our last active raised bogs continues unhindered? This turf cutting is a crime, destroying a rare surviving endangered habitat of European importance,” the group said.

Gardaí observed the turf-cutting activity from the public road, but made no arrests. Clonmoylan and Barroughter Bogs Action Group spokesman Dermot Moran said access to the bogs was by private road and the plots were privately held.

FIE, which has lodged a petition on the issue with the European Parliament, said turf-cutters “continue to act against the public interest despite generous compensation packages for which many people in Ireland would be extremely grateful”.

“We have great sympathy for the turf-cutters whom successive governments have misled. But at this stage the Government has dealt more than fairly with the turf-cutters’ demands with monetary payments, relocation and supplies of fuel delivered to their homes.”

Tony Lowes, one of FIE’s directors, said it had understood that the Government was determined to end illegal turf-cutting under new legislation introduced last year. But the Government had “failed to do more than begin token legal proceedings” against the culprits.