Commissioner a victim of ‘a question of judgment’ 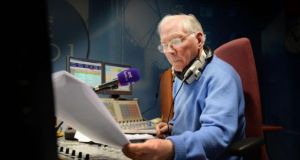 Road Safety Authority chairman Gay Byrne has defended the character of Garda Commissioner Martin Callinan and said his resignation could have been avoided had he issued an apology for his controversial “disgusting” remark in the Dáil Public Accounts Committee.

Road Safety Authority chairman Gay Byrne has suggested Minister for Justice Alan Shatter “should be able to sniff the air” in terms of public opinion about his position following the resignation of Garda Commissioner Martin Callinan this morning.

There have been several calls from politicians today for Mr Shatter to step down from his portfolio. Speaking to the Irish Times this afternoon, Mr Byrne stopped short of giving his own opinion on the matter but said the public “probably feel as strongly about Alan Shatter” as about Mr Callinan.

“I think Alan Shatter must have a politician’s feeling and Enda Kenny must have a politician’s feeling and they should recognise that the vast majority of people in Ireland feel sorry about Martin Callinan but feel it’s right that he should resign because there’s nowhere else for him to go – and they probably feel as strongly about Alan Shatter,” he said.

Mr Byrne also defended the character of Mr Callinan and said his resignation could have been avoided had he issued an apology for his controversial “disgusting” remark in the Dail Public Accounts Committee.

“I am extremely sad,” said Mr Byrne. “He has always been the essence of good manners, courtesy and graciousness to me. We have had dealings from time to time in the depot and it has always been a pleasant experience.

“I’m very sad to see a good man brought down – but there you are. I suppose the error in judgment he made was that he might have seen a fortnight ago the best thing and the right thing to do would have been to follow the instincts of the Irish people and apologise to the two boys and try to make amends to them.

“I have expressed the dream that both Alan Shatter and he would do what’s called the right thing, which we’re all called upon to do from time to time in life – to our own detriment – just do the right thing no matter what.

“The right thing to me would have been to come out and say: ‘We were wrong. You two were right. You’ve suffered badly because of it. We apologise unconditionally to you.’