Karen Buckley remains on the minds of people of Glasgow 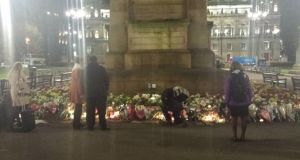 Visitors reading tributes to Karen Buckley at the site of a vigil for the young Cork woman at George Square, Glasgow. Photograph: Barry Roche

It’s midnight and Glasgow is buzzing with young guys and girls at the start of their nights out, but even in the midst of their excitement, people are thinking of Karen Buckley.

The crowds who had flocked to George Square in the centre of the city for an afternoon vigil have long dispersed and departed but the candles are still flickering.

People are still coming to the vigil site, walking over to the array of floral bouquets laid by the people of Glasgow in front of the Sir Walter Scott monument to remember the young Cork woman.

Here in the city that she had come to call home some three months ago, Karen Buckley’s story has stilled her adopted city to the core.

Alone, in pairs and in groups, they come to the monument to look at the tributes and read messages about the Irish woman.

No one spoke and they each spent only a few minutes at the site, but the visitors seemed to be engaging in a silent prayer for the girl from Mourneabbey whose story had struck a chord with all of them.

A candle flickered in front of a large picture of a smiling Karen, placed there earlier in the evening by her parents, John and Marian and her brother, Kieran, as they attended the vigil.

In front of the photograph and candle lay a piece of cardboard and on it a message of respect and remembrance from a Glaswegian.

“Shine on, you diamond - you will always be remembered by the people of this great city - sleep well, Karen,” it read, written with a chunky marker and a shaky hand.