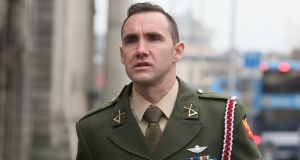 Sgt Edmund O’Neill arriving at the Four Courts for the continuation of his High Court action for damages. Photograph: Courts Collins

An Irish soldier who suffered a brain injury when the UNIFIL land cruiser in which he was travelling in Lebanon crashed, killing four of his colleagues, has settled his High Court action on undisclosed terms.

Edmund O’Neill, who also served in Liberia and Chad, and the four other soldiers were on the way to Beirut on leave from peacekeeping duties in 2000 when thecrash happened.

The UNIFIL registered open-top SUV, part of a five-vehicle convoy on the Tire to Beirut road, skidded on an oil spillage on the road, went out of control, hit a metal barrier and overturned. The five passengers were thrown from the vehicle and four of them were killed.

Sergeant O’Neill (36), Tower View Park, Kildare, has sued the Minister for Defence and the State as a result of the crash on  February 14th, 2000.

The President of the High Court, Mr Justice Nicholas Kearns, was told liability had been admitted in the case which was before the court for assessment of damages only.

When the case was called on Thursday, on the second day of the hearing, Padraig McCartan SC, for Sgt O’Neill, said the case had been settled and could be struck out.

Mr Justice Kearns said he was delighted the case had settled. He was impressed by Sgt O’Neill in the witness box given everything he had gone through since the tragic incident occurred, the judge said, adding he wished the soldier well for the future.

When opening the case, Mr McCartan  said the then 21-year-old soldier suffered a skull fracture in the crash and was taken to Sacre Coeur Hospital in Beirut. He suffered an acquired brain injury and was in the Beirut hospital for 30 days before he was airlifted to Dublin.

He later resumed light duties with the Defence Forces in September 2000 and was promoted to the rank of sergeant, the court heard.

As a result of his brain injury, Sgt O’Neill loses track of conversations and is forgetful, counsel said.

In evidence, Sgt O’Neill said he had no recollection of the accident. All he remembered was handing in his weapon and changing into his civilian clothing before going on leave. The next thing he woke up in the hospital several days later, he said.