Taxi driver claims Thomas Conlon was ‘author of his own misfortune’ 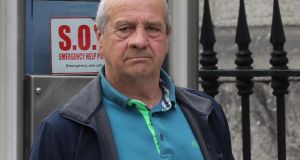 Taxi driver Frank Daly leaves the Four Courts after the opening day of a High Court action against him taken by Thomas Conlon. Photograph: Collins Courts 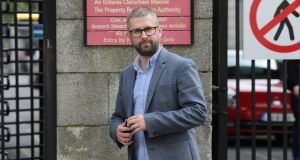 A man has told the High Court, after he asked a taxi driver to turn down the radio, the driver shouted at him, drove erratically and ran over his foot as he was getting out of the car.

Thomas Conlon told Mr Justice Michael Hanna he called a taxi to bring his mother, aged in her 80s, to St Stephen’s Green in Dublin city centre so they could have a stroll and dinner.

He said, after the taxi ran over his foot, he fell to the ground dislocating his shoulder and the taxi took off down the road with his mother still inside. “I could not believe what happened. He could have killed me when he ran over me.”

He said he later found his mother sitting on a wall, weeping and distressed, they were both upset and shocked and went home.

Mr Conlon (38), a psychiatric nurse of The Maples, Bird Avenue, Clonskeagh, has sued Frank Daly, Mourne Road, Drimnagh, a taxi driver with Local South Side Taxis, over the incident on April 25th, 2014.

He claims he ordered a taxi from Local South Side Taxis and Mr Daly pulled up at 6.30pm. He claims Mr Daly began to drive erratically, failed to remain at the scene of an accident, and was allegedly driving at an excessive speed in the circumstances.

Mr Daly denies the claims and pleads Mr Conlon was the author of his own misfortune.

Opening the case, Richard Kean SC said the circumstances of the accident were “deplorable” and there was the appalling situation where Mr Conlon saw the taxi drive off, the door open and his mother inside.

In evidence, Mr Conlon said the radio was extremely loud as the taxi driver was listening to a soccer commentary. He said he asked the driver to lower the volume but Mr Daly said no, he was there to bring them from A to B and that had nothing to do with the radio.

The radio was extremely loud even for somebody deaf such as his mother, Mr Conlon said. He asked twice to be let out of the car and, when the taxi did pull in, the driver shouted at him about money and he said he would pay once he had helped his mother from the car, he said.

“I had one foot out of the car, he put the car in gear and began to drive off. I was hopping on one leg and the car ran over my left foot.”

In evidence, Mr Daly said he was listening to football results and thought the volume was reasonable. When Mr Conlon told him he wanted to get out of the car, he told him the fare would be €6, he said. “He said I was getting f... all. I stopped and he was out on the road screaming.”

Mr Daly said he had stopped the car near a dangerous bend so he drove on to park it and did not run over Mr Conlon’s foot.

Cross-examined by Mr Kean, Mr Daly denied he was the one behaving abnormally and said he wanted to get his fare.

Mr Conlon’s mother gave him €10 for the fare but Mr Conlon had been running after the car shouting and saying he was kidnapping his mother, he said.