Judge says while a shop can evict someone, the duty of care does not stop at front door 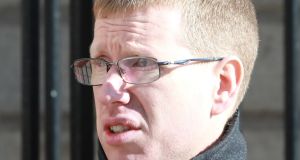 A man who was prevented re-entering a store while fleeing would-be attackers and later suffered a fist blow to the head has been awarded more than €750,000 damages by a High Court judge.

Mr Justice Kevin Cross said Cian McCarthy was an innocent party who suffered a “most significant and serious” brain injury in the assault outside a Centra supermarket on Grand Parade, Cork, during the Cork Jazz Festival seven years ago.

A psychiatric nurse, Mr McCarthy was earlier escorted from the store after a disagreement at the deli counter when another person jumped the queue.

Mr Justice Cross found the defendants’ duty of care did not stop at the door of the premises.

While they were entitled to eject Mr McCarthy, although he was “entirely innocent” in order to avoid confrontation, the first security guard should have noticed three people involved in the queue jumping row were following him and advised the second security guard of the situation.

‘Thrown to the wolves’

“A property owner or its security staff duly entitled may lawfully evict a customer from their premises but that eviction cannot involve the person in effect being thrown to the wolves with the property owner having no concerns of legal liability for anything that occurred once the eviction had taken place,” he said.

In failing to re-admit Mr McCarthy and pushing him back towards the danger, the defendants knew or ought to have known as a matter of virtual certainty Mr McCarthy would suffer some assault and some harm, he said.

Earlier, the judge said Mr McCarthy went to the Centra supermarket at around 2am on Hallowe’en night with his fiancée and joined a queue at the deli counter as he wanted to buy rolls.

When a man with a cardboard box on his head attempted to jump the queue, Mr McCarthy and his fiancée objected.

Mr McCarthy was then assaulted around his mouth.

The judge said the security guard wanted to separate Mr McCarthy, in a row at this stage with three people, and escorted Mr McCarthy from the shop.

The three people involved in the row inside had followed Mr McCarthy from the shop, chased him and attempted to hit him on the head.

Mr McCarthy backed away trying to cover his head, the judge said. He managed to break loose and made for the front door of the shop seeking safety.

However, the second security guard, who did not know Mr McCarthy was the innocent party and did not witness him being beaten and pursued outside, had barred his re-entry to the shop.

Mr Justice Cross concluded the security guard pushed Mr McCarthy back towards the crowd. He held the best explanation for what occurred was that Mr McCarthy was pushed back in a falling motion and grappled by the man with the box on his head as he was falling. This caused the impact, knocking down a young woman standing outside the shop.

That woman’s boyfriend unfortunately intervened with a “massive fist” to Mr McCarthy’s head causing him to fall to the ground, crack his head and suffer a serious head and brain injury, Mr Justice Cross said.

That man was later sentenced at Cork Circuit Criminal Court to five years jail with the last two years suspended for the assault on Mr McCarthy.

Mr Justice Cross granted a stay in the event of an appeal.