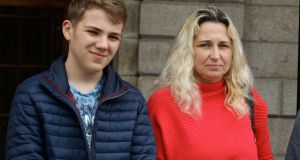 A boy whose mother, his sole parent, died of breast cancer three years ago has secured €325,000 under a settlement of his High Court action against the HSE over an alleged delay in diagnosing her.

The settlement was without admission of liability.

Krzysztof Sliwa, aged 13, now lives with his aunt in his native Poland following the death of his mother Dorota Sliwa when he was aged 10.

Through his aunt Magdalena Paczkowska Tomczak, the boy sued the HSE over the death of Ms Sliwa in October 2015. At the time, they were living at Gleann Cora, Newmarket-on-Fergus, Co Clare.

Patrick Treacy SC, for the boy, said the HSE was cognisant of the tragic circumstances in which the boy had lost his mother and it was not a confrontational case.

It was claimed the boy shared in the suffering of his mother during her terminal illness and had at tender years endured the stress, distress and upset of living with a close family member during their terminal illness.

Krzysztof’s mother was, it was claimed, seen by medical staff on a number of occasions from about July 2009 to her death in October 2015.

She had a mammogram here on August 5th, 2009, but was not referred for family history gene testing. She was reviewed again in 2010 and 2011.

In Poland in 2012, a mammogram and ultrasound were carried out and a biopsy recommended. In December 2012, a malignant invasive cancer was confirmed and Ms Sliwa had to have a mastectomy.

In April 2014, Ms Sliwa complained of back pain and was found to have further cancer. She underwent chemotherapy but the disease was aggressive.

It was claimed that she died in October 2015 by reason of delay in diagnosis and/or treatment.

Approving the settlement, Judge Kevin Cross said the “helpful attitude” of the HSE in the legal action was to be highly commended.

While nothing would compensate the boy for the loss of his mother at a young age, his legal team had secured a good settlement, he added.

Healthy one day, ventilated the next – a Covid-19 survivor’s story 03:08
HSE signs deal with German lab to add ‘surge’ testing capacity for winter 02:34
Covid-19: HSE agrees deal with German lab to boost testing capacity 02:16
Replacement wards of court system to be delayed without Budget funding 01:46
HSE’s contact tracing service at its busiest since peak of outbreak in mid-April 01:02

1 The FinCEN files: The billion dollar a month money trail
2 The Sack of Balbriggan: The burning of a town that shocked the world 100 years ago
3 Brexit: Irish hauliers seek State help to bypass UK ‘land bridge’
4 Coronavirus: 396 more cases as public is urged to help protect ‘older and vulnerable’
5 Civil War rape which led to pregnancy recalled in new TV documentary
Real news has value SUBSCRIBE