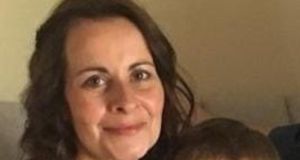 The mother of the three McGinley children has appeared in court charged with their murder in Newcastle, south Dublin last week.

Deirdre Morley (43) of Parson’s Court, Newcastle, south west Dublin is charged with three counts of murder at her home on Friday, January 25th, 2020.

The woman appeared at Dublin District Court in the Criminal Courts of Justice on Parkgate Street on Wednesday afternoon after arriving in a black van with tinted windows in the company of detectives.

Ms Morley, who works as a nurse at Crumlin Children’s Hospital, was brought into Court Two through a back entrance.

Wearing a green cardigan, navy top and jeans, Ms Morley sat in the defendants’ area and did not address the short hearing.

Detective Sergeant Dara Kenny told the court Ms Morley made no reply when charged with the three counts of murder at 2.39pm on Wednesday afternoon.

There was no application for bail. Her solicitor Jonathan Dunphy asked that Ms Morley receive medical treatment while in custody as well as continuing psychiatric treatment and assessment.

Judge Paula Murphy agreed to the order. She also granted Ms Morley legal aid after hearing there was no objection from the State.

She also agreed to direct that copies of Ms Morley’s garda interviews be made available to the defence.

The judge remanded Ms Morley in custody until next Wednesday, February 5th, 2020 when she will reappear at Dublin District Court.

Ms Morley was initially taken to hospital after being found in a disorientated state near her home on Friday evening. She was treated in Tallaght Hospital until Tuesday evening when she was arrested by gardaí and taken to Clondalkin Garda station.