36-year-old died after he was stabbed after car stopped in Lucan, Dublin on January 18th 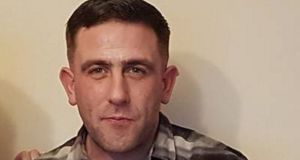 A father and two sons and another youth have been charged with the murder of Neil Reilly in Dublin.

Father-of-two Neil Reilly (36) sustained serious injuries in the early hours of January 18th after his car came to a halt and he was attacked and stabbed in the Esker Glebe area in Lucan, not far from his home at St Finian’s Close. Earlier, shots had been fired at a house in west Dublin.

He was taken to James Connolly Memorial Hospital where he was pronounced dead a short time later.

Gardaí seized a number of cars for technical examination and on Monday four males ranging in ages from late teens to fifties were arrested.

They were detained at Finglas, Lucan and Blanchardstown Garda stations where they were charged and held overnight before they faced court hearings.

They are all charged with the murder of Mr Reilly .

The three men and the 17-year-old youth were brought to appear before Judge David McHugh at Blanchardstown District court. The teenage boy cannot be named because he is a minor .

Det Sergeant Sean Cosgrove told Judge McHugh that the youth was charged at 4.38am on Tuesday and “he made no reply”.

The District Court cannot grant bail in murder cases. Judge McHugh remanded him in custody to appear again at Blanchardstown Children’s Court on February 6th. The boy remained silent during the brief hearing. He was accompanied to the hearing by an adult female and his solicitor Tracy Horan.

Remanding him in custody, Judge McHugh directed that the boy is to be “afforded all necessary support in detention”.

After his hearing ended the adults cases began. Paul Bradley (52) and his sons Jason Bradley (18) and Dean Bradley (22) of Liscarne Gardens, Ronanstown, west Dublin were remanded in custody to appear at Cloverhill District Court on Friday.

Garda Thomas Doyle told the court that Paul Bradley, who was wearing a wine fleece top, blue tracksuit bottoms and black runners, was charged at Blanchardstown station at 5.10am after which he was cautioned and he had no reply.

A statement of his means was furnished to the court in an application for legal aid and he was remanded in custody.

Jason Bradley, dressed in black shorts and a blue zipped jacket and runners, was next to go before the judge. Garda Sgt Maeve Ward told the court that he replied, “No” when he was charged at 4.39am. A statement of his means was handed in to court .

Dean Bradley, who was wearing a grey and red hoody, navy tracksuit bottoms and black runners, was charged at 4.38am. Defence solicitor John Wood provided the court with a statement of his client’s means

Dean Bradley made no reply to the charge, Garda Damian Gannon told the court.

Legal aid was granted to all four.

The defendants, because they are charged with murder, will have to make an application in the High Court to get released on bail. A book of evidence has yet to be prepared.