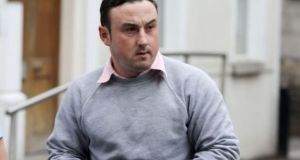 Aaron Brady has told his trial that he is a victim of the media and the Garda who he said “ganged up” on him following the shooting of Det Sgt Adrian Donohoe.

Denying any involvement in the robbery that led to Det Sgt Donohoe being shot dead, Mr Brady on Tuesday told prosecution counsel Brendan Grehan SC that he was targeted because he lied to gardaí about his movements. But he insisted he lied to cover up his involvement in illegal diesel laundering and that his lies had nothing to do with the murder.

He further accepted that the first time the Director of Public Prosecutions was notified of his alibi was in December last year. Mr Brady also said that prosecution witness Molly Staunton was “mistaken” when she said she heard Mr Brady admit to shooting a “cop” and he dubbed another prosecution witness, Daniel Cahill, a “psychopathic, pathological liar”.

Mr Cahill has told the trial that he heard Mr Brady admit to killing or shooting a garda in Ireland on three occasions while Mr Brady lived in New York. Mr Brady also called Sgt John Moroney a liar as he disputed Sgt Moroney’s testimony that he, Mr Brady, claimed to have no knowledge of the shooting when he was questioned by gardaí the day after it occurred.

Aaron Brady (29) from New Road, Crossmaglen, Co Armagh has pleaded not guilty to the capital murder of Det Sgt Adrian Donohoe who was then a member of An Garda Síochána on active duty on January 25th, 2013 at Lordship Credit Union, Bellurgan, Co Louth. Mr Brady has also pleaded not guilty to a charge of robbing approximately €7,000 in cash and assorted cheques on the same date and at the same location.

Beginning his cross examination, Mr Grehan asked the accused if he was “the victim in all of this”.

Mr Brady replied: “I would say I am.”

When Mr Grehan asked if the media and gardaí “ganged up on you”, he replied: “Absolutely, no question.”

The accused said: “I lied because I was involved in diesel laundering not because of the murder of Adrian Donohoe. That is the only lies I told. I’m on oath. I’m not lying now.”

He denied that he “distorts bits of truth” or that he took “a little bit of truth and tweaks it to suit” himself or that he was “sculpting a story” around his lies based on what he knew about the prosecution case.

Mr Brady accepted that nobody was with him in the yard to back up his alibi but said there are others who knew what he was doing at that time. He denied any involvement in stealing a car that the prosecution alleges was used during the robbery and later found burned out on Cumson’s Lane in south Armagh.

In January 2013 Mr Grehan suggested Mr Brady was under “money pressure” as he wanted to buy a car for his then girlfriend Jessica King and was due in court where he would need to pay thousands of euro in compensation for criminal damage or face going to prison.

The accused denied that he was under money pressure, saying he got up to €300 per job for diesel laundering and had received €2,750 from a compensation claim in Northern Ireland.

He said he did jobs here and there, sometimes helping his father out with things that needed to be done at local GAA club Crossmaglen Rangers.

During a broad cross examination, Mr Grehan asked what date Mr Brady started going out with Ms King. He initially said he couldn’t remember the exact date but, when pushed, he revealed the date, adding: “I have it tattooed on my back.”

Mr Grehan asked him if he had told “another little lie” when he pretended not to remember the date.

He said: “It’s just embarrassing. My wife is sitting in the courtroom.” When he couldn’t remember the date he started going out with his wife Danielle, he apologised to her.

Mr Brady accepted that he shouldn’t have told Ms King to lie for him about his movements in January 2013 but insisted that he told her to tell the truth after police called to her home.

Counsel also brought Mr Brady through what the accused accepted were a series of lies he told to gardaí in February 2013. He said the lies were either to cover his involvement in diesel laundering or to cover up the fact that he owned and drove a van even though he was banned from driving.

Mr Grehan will continue his cross examination in front of Mr Justice Michael White and a jury of six men and seven women on Wednesday.