Oliver Kierans (57), from Cavan, found not guilty of murdering Patricia Kierans in 2013 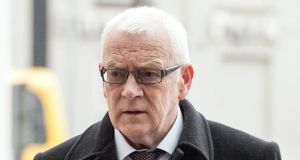 Oliver Kierans (57) has been found guilty of the manslaughter of his wife Patricia in Cavan in 2013. Photograph: Collins Courts

A 57-year-old Cavan man has been found not guilty of murder, but guilty of the manslaughter of his wife in 2013.

The jury of five women and seven men returned after more than 15-hours with a majority verdict that Oliver Kierans was not guilty of murder but guilty of manslaughter.

Kierans, of Drumbannon, Bailieborough in Co Cavan, had pleaded not guilty to murdering Patricia Kierans (54) on September 5th, 2013 at the same address.

He had also pleaded not guilty to unlawful possession of a 12-gauge double barrel shotgun, but was found guilty of that charge earlier this week by the jury.

He was found guilty of the possession of the same gun with intent to endanger life by a majority verdict of 11 to one.

The two-and-a-half-week trial in the Central Criminal Court heard that Patricia Kierans, who had been married to Oliver Kierans for more than 33-years, had moved out of the family home in June 2013.

The court heard that she had moved in with her sister and had started a relationship with another individual.

The jury were told that this did not sit well with the accused, who had recently begun drinking again after a period of abstinence.

On September 5th, 2013 the court heard that Mr and Mrs Kierans had gone to the family home together.

Kierans told gardaí during interviews that he brought his wife to a second-floor bedroom to show her he was going to “do away” with himself.

During his testimony, Kierans described how he lifted the gun and “the yoke hit the top of my hand”.

The court heard that Patricia Kierans was shot with a shotgun at quite close range, sustaining a serious wound to her chest, from which she died.

State pathologist Marie Cassidy gave evidence that the cause of death was a shotgun injury to the chest, which could have been shot from a distance of 1.2 metres (4 ft) and that the injuries were of such severity that death would have been almost immediate.

Garda Adrian O’ Hanlon, of Virginia Garda Station, had previously given evidence that he was directed to go to the Kierans family home, where he found the body of Patricia Kierans.

The prosecution also alleged that Oliver Kierans went to The Square bar in Bailieborough, where a “siege” took place involving a sawn-off shotgun.