Buncrana pier rescuer tells how father shouted ‘save our baby’ 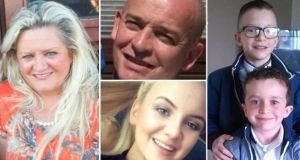 Seán McGrotty, who was in his late 40s, his two sons Mark (12) and Evan (8), and the boys’ grandmother Ruth Daniels (59) died alongside her grandddaughter Jodi-Lee (14)

“I got a feeling something was not right – I don’t know why,” Louise James told the inquest into the Buncrana drowning tragedy.

In a harrowing day of evidence Ms James informed the coroner, Dr Denis McCauley, of her sixth sense that her family, all from Derry, had suffered terribly in an accident that happened on a “beautiful” March evening in Inishowen, Co Donegal, last year.

Dr McCauley is conducting inquests into the deaths of Louise James’s partner Sean McGrotty (49), her sons Mark (12) and Evan (8), her mother Ruth Daniels (59) and her 14-year-old sister Jodie Lee Daniels.

They drowned after the Audi Q7 driven by Mr McGrotty slid on “treacherous” algae close to the bottom on Buncrana pier into the waters of Lough Swilly.

It was all part of distressing testimony that the coroner, the jury of nine members and the victims’ families heard during the inquests in the Lake of Shadows Hotel in Buncrana.

The jury also heard of the courage of Davitt Walsh who – with his then girlfriend Stephanie Knox – helped save the life of Rioghnach-Ann, the four-month-old daughter of Seán McGrotty and Ms James.

Ms James was at the airport in Liverpool at 7.25pm on Sunday, March 20th, last year when she got a “bad feeling”.

She was about to fly home from a hen party with friends in England. Half an hour earlier she spoke by phone to her sister Jodie Lee Daniels and her sons Mark and Evan, who were enjoying an evening out in Buncrana. She told them she would see them later.

But 30 minutes later, as she was about to board a flight to Belfast, she got an anxious “bad feeling”, she said in her deposition to the inquest.

She rang her partner Seán and her sister but got no reply. She then rang her brother Nathan in Derry, and asked was her mother home. He told her no.

She then rang her brother Joshua, who asked had she been reading social media. She said no. He was able to tell her of an accident in Buncrana, although he did not have the details of the victims.

It was about this time that the five members of her family drowned in Lough Swilly.

It was not until her plane landed in Belfast that she learned what had happened. She also had to go to Letterkenny hospital to identify all five victims, and to be with her surviving daughter.

Mr Walsh, from Kerrykeel, Co Donegal, told the inquest how he drove to the pier with Ms Knox to enjoy the view. They noticed an Audi Q7 SUV which appeared to have just slipped into the water. He said he could hear “shouting and screaming coming from the car”.

Ms Knox said to him: “Go do something, Davitt.”

He stripped down to his underpants and swam out to the car. He said by that stage Mr McGrotty had broken the front driver’s window with his elbow.

Mr Walsh, who later received a gold medal award for his bravery, shouted to him to “get everybody out of the car”. He said Mr McGrotty sat on the ledge of the window with his feet in the car and his head and shoulders out of the vehicle. He handed over the baby to Mr Walsh, and said “save the baby” or “save our baby”.

Mr Walsh described how a “wee boy” came from the back seat and tried to escape. He tried to grab the child’s arm but was unable to hold on. The water “was like a massive wave rushing into the car”. He described how Mr McGrotty also went back into the car.

Mr Walsh said the car was about 25m from the pier at that stage. Shortly after he rescued the baby, it sank into the water. He then swam back to the slipway.

At the pier he passed on the baby to his girlfriend. He said she slipped on the algae and had difficulty getting up the slipway. He dug his feet into a crack in the concrete and pushed her up the slope.

He said when he finally got up the slipway he was so exhausted he could hardly breathe. He suffered cuts to his feet and was taken to Letterkenny hospital for treatment.

Mr Walsh said that, as a man familiar with piers and harbours, he was conscious of the dangers of algae, but a stranger would not be so aware.

Local man Francis Crawford said he went out for a Sunday drive with his wife Kay, arriving at the Buncrana slipway at about 7.09 pm. He told the inquest how he observed Mr McGrotty’s Audi at the bottom of the slipway. At that stage the water was about 10cm up along the wheels of the vehicle.

He called to the driver: “Are you okay?” In a panicked voice Mr McGrotty shouted back a number of times: “Phone the coast guard.”

Mr Crawford said he rang 999 and got through to the coast guard to issue the alert. As Mr McGrotty continued to appeal for help and as the car drifted further into Lough Swilly, Mr Crawford shouted to him that help was on the way.

He said he could hear children in the car “squealing and roaring crying”. At that stage Mr Walsh and Ms Knox had arrived at the scene.

Mr Crawford said the car appeared to slowly move out into the water where it bobbed up and down. Eventually, the nose of the car tilted and shortly afterwards the car sank.

He then described how three bodies surfaced, one an adult who appeared to be trying to swim. Mr Crawford said there was no movement from the other two bodies.

Shortly thereafter the RNLI got a boat out on to the water and started bringing in the bodies. Attempts at resuscitation were unsuccessful.

Mr Crawford said the algae at the bottom of the slipway was “treacherous to walk on and as slippery as ice”. He estimated the car was in the water for about 12 minutes before it sank.

Kay Crawford, corroborating her husband’s evidence, described how the tide, which was going out, dragged the car away from the pier.

She said that when Mr Walsh swam in with Rioghnach-Ann the baby’s clothes were soaked but her head was dry. She was confident at that stage the baby would survive. She also told how the baby was brought to Ms Knox’s car where its heater was used to warm her.

Local garda Sgt Mark Traynor said the car was completely submerged when gardaí arrived at the scene. He described how the rescue services brought ashore the bodies, and how attempts were made at resuscitation. He was aware of only one lifebuoy present at the scene.

John McLaughlin, an engineer with Donegal County Council, said there were no signs at the slipway warning it was slippery due to the algae. While new warning signs are to be erected at the pier, there were none at present warning of the dangers of algae. Such risks were self-evident.

John Leech, chief executive of the Irish Water Safety organisation, said the Buncrana drownings was the only such accident he had witnessed in 17 years in the organisation. He told the inquest of the need to have signage warning of the general dangers at piers and slipways.