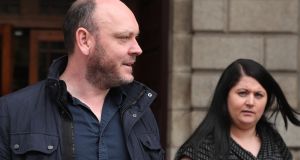 A judge has thrown out a €60,000 damages claim brought on behalf of a three-year-old child, who fell and cut his bottom lip while running from a restaurant.

Judge John O’Connor said in the Circuit Civil Court on Monday that Evan Davis was not on a “moisture and dust control mat” - blamed for having caused his fall - when he fell and injured himself in Subway in the Carrickmines Shopping Centre, Dublin three years ago.

Judge O’Connor told barrister Conor Roberts, counsel for the restaurant and food store, that in relation to the law of negligence it was quite clear a claimant had to prove there had been negligence on the part of his client and the evidence before him had fallen short of that.

He said there had been a direct conflict of evidence and opinion between forensic engineers Conor McGuire, for the company, and David Brown, on behalf of the boy, as to how the incident might or might not have occurred and the court was convinced that Evan was not on the mat when he had fallen.

Mr Roberts, who appeared with Bernadette Raleigh of BLM Solicitors, for Beacon Mart Limited, the then proprietor of Carrickmines Subway, told the court the boy had been running towards the exit and was not on the mat, which was alleged to have had ripples, ridges or ruffles running through it, when he had fallen.

Counsel asked the boy’s father Barry Davis, of Beacon South Quarter, Sandyford, Dublin 18, if he was trying to convince the judge that his three-year-old boy had never previously fallen. Mr Davis replied: “No, but he never had a fall similar to that one or anything close.”

He agreed with Mr Roberts that Evan, who sued through his mother Sinead Davis, had to have the use of a child’s high chair while at the table. While Mr Davis was answering his mobile phone Evan and his sister had run ahead of him. He had then heard a scream.

Mr Davis said he had taken two photos of the mat only minutes after the incident and it was clear to him from the photographs produced in court that there were about 10 ripples on it. He said his son had split his bottom lip both inside and to the outside and had to be taken to hospital where it had been treated with steri-strips.

Judge O’Connor heard that medical reports in the case had been agreed between counsel and it was accepted the boy had been left with a small scar under his bottom lip.

The proprietor of Subway at the time, Mr Ifran Hanreeb, told the court staff had been specifically trained as to the lifting and laying of the 2.7 metre long moisture and dust control mats which had been used on both wet and dry days.

Dismissing the boy’s claim, Judge O’Connor said he was a lovely child and he was glad he had made such a good recovery.