Banking inquiry: Oireachtas was ‘hampered’ in holding government to account 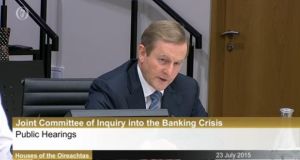 Mr Kenny appeared before the banking inquiry on Thursday to outline Fine Gael’s response to the crisis.

The Taoiseach said the Oireachtas was hampered in its ability to hold the then-government to account.

He said elected representatives were bypassed “as a result of the dominance of social partnership as the forum for influencing - behind closed doors - government choices in all key policy areas”.

He also said there was an absence of any requirement at that time to conduct and publish cost benefit analyses on tax shelters and major infrastructure projects and to subject all major expenditure programmes to regular review.

Mr Kenny said flaws in the euro zone contributed to the crisis but “the lion’s share of the damage to the Irish economy was the fault of domestic, economic and financial mismanagement”.

He said: “We have learned the hard way that being part of the euro presents not just opportunities, but huge domestic challenges - the need for more effective regulation of the financial system, for greater budgetary discipline, for more responsible and transparent politics, and for relentless pursuit of cost reductions, innovation and product and labour market flexibility to maintain our competitiveness in the absence of any control over our exchange rate.”

Mr Kenny is joined by Minister for Jobs Richard Bruton, who was finance spokesman for Fine Gael in 2007.

In his opening remarks to the committee, the Taoiseach admitted his party had accepted the same projections as the then government in 2007.

The Fine Gael leader said: “It, of course, has been documented that the Fine Gael party, in its 2007 election manifesto, adopted broadly similar assumptions as the then government about economic growth, tax receipts and public spending over the subsequent five-year Dáil term.

“These assumptions were drawn from contemporaneous projections by the department of finance and the Economic and Social Research lnstitute.

“Our assessment at the time was that these projections were credible on the basis of a steady, managed transition back to the competitive, export-oriented economic model that drove Ireland’s strong and sustainable economic recovery during the 1990s.”

Minister Bruton said Fine Gael consistently exposed the mistakes of the then government.

He said the sad part was that the property boom “papered over” the vulnerabilities in the Irish economy.

The Minister said the tax revenue masked the fact that it was unsustainable.

He said the approach to budgets was “wholly wrong” and “fancy plans” were drawn up in health and decentralised that never materialised.

Fine Gael TD Eoghan Murphy asked why Fine Gael supported the introduction of a blanket bank guarantee and whether the party consulted with the Labour Party on their decision not to.

Mr Kenny said Fine Gael believed this was in an emergency and the country needed a functioning banking system.

He said: “This was a really serious situation so we supported the guarantee.”

The Taoiseach said Labour was perfectly entitled to make that decision but his party supported it because it believed this was an emergency situation.

Socialist TD Joe Higgins asked whether these events were any different than the Galway Tent, which Mr Kenny had criticised.

Mr Kenny said people are entitled to support whoever they want but no monies from developers had any bearing on the party’s decisions or interests.

The Fine Gael leader said: “It costs a considerable amount of money to run a party. The vast majority of funds come from the national draw and from ordinary members of the party.”

Mr Kenny said any fund-raiser for the party was an occasion of a social nature and not in the terms Mr Higgins had used.

Mr Kenny was earlier asked about conversations he had with Matt Moran, a former chief financial officer with Anglo Irish Bank.

The Anglo Tapes, revealed by the Sunday Independent, showed Mr Kenny was in contact with Mr Moran in November 2008.

The Taoiseach said he was from Castlebar, Co Mayo but denied they had any conversation about banks or Fine Gael policy.

He said he rejected any such assertion and said there had been no conversation of substance with him.

He said: “I was asked to take a call... He didn’t say anything of substance. I don’t recall mentioning anything about Fine Gael policy.”

Mr Kenny told the inquiry he and Minister Bruton attended a meeting in Anglo Irish Bank in 2008.

He said there was a presentation given by senior members about the structure of the bank and the way loans and mortgages were approved.

Mr Kenny was then asked about any dealings he had with former chief executive of Anglo David Drumm.

He said he had met him at that meeting in 2008 and said it was a formal engagement.

The Taoiseach said it was a general discussion about the economy and the “healthy state or otherwise of the banks”.

He said the picture was painted that Anglo was a “model bank that emerged from the recession”.

Mr Kenny was questioned about whether he accepted a form of hospitality from any property developer.

He said: “I have never gone round asking property developers for a lift. I have never sought hospitality or transport from a developer.”

The Taoiseach said the question from Fianna Fáil Senator Marc MacSharry was “ridiculous”.

Mr Kenny denied he had undermined the work of the committee by claiming there was an axis of collusion between Fianna Fáil and the bankers.

He was asked why the Government insisted on having a majority at the committee and Senator MacSharry asked whether Mr Kenny had told his party to “take MacSharry out”.

Mr Kenny said he would never attempt to undermine another West of Ireland man.