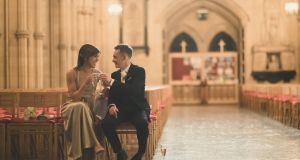 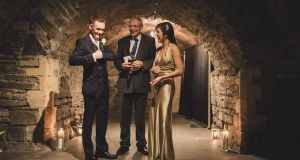 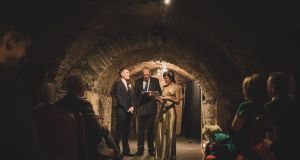 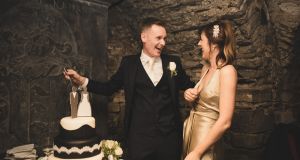 When Sinead, from Dublin, and John from Louth, met out in Dublin in early 2014, they realised that they knew a lot of the same people and their paths had crossed many times in the past.

John, a manager in the Irish health services, proposed to Sinead after dinner in their home on New Year’s Eve 2014. After a registry office ceremony the week before, Sinead and John had their “real wedding” – a blessing and exchange of rings officiated by John’s uncle Aean, a retired minister – on September 12th, 2015.

“We had heard about the crypt in Christ Church Cathedral, and fell in love with it the minute we stepped foot in it,” said Sinead, an e-learning project manager. “It worked out perfectly as there was no moving between venues so the evening flowed beautifully.”

But as the venue is open to the public, it meant a considerable amount of work.

“We could only hire it from 5pm and the ceremony started at 6pm. We had an hour to get the place ready. So the two of us, our families, and the catering [Dan from Relish Cuisine] and crypt staff flew around and got everything ready in that one hour.”

“This might sound like a nightmare for some couples but for us it was fun and a great distraction before the ceremony.”

The couple didn’t have bridesmaids and groomsmen but agree their wedding wouldn’t have been the occasion it was without the help of their loved ones, including Sinead’s sisters Ruth and Ally and John’s brother Liam. Sinead’s cousin Johnny compiled a playlist of classical music for the reception and John’s friend helped source the PA system.

Sinead’s friend Yvonne sang and organised the background music. Their band, The Incredibles from Cork, “nailed the first dance”, Landon Pigg’s Falling in Love in a Coffee Shop. The cake was made by Denise Walsh and Penny Plunkett.

The newlyweds both say the ceremony – which they wrote themselves – was their favourite part of the day with John adding that, “I was never so proud as to be standing across from Sinead.”

Sinead and John honeymooned in California and Mexico.