Irish Women of the World: Louise Richardson and other education movers and shakers

From the first woman vice-chancellor of Oxford University to a nun reforming education in India, women are blazing a trail in academia 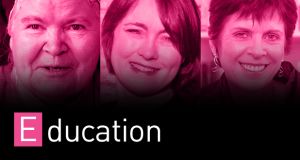 Prof Louise Richardson is accustomed to smashing moulds. In January, the Tramore-born 57-year-old was formally installed as Oxford University’s 297th vice-chancellor, becoming the first woman to hold the most senior office in the oldest university in the English-speaking world. It was hailed as a momentous event in Oxford’s illustrious history. For Richardson, it was “the culmination of a lifetime’s ambition”.

The Tramore convent-school girl besotted by the IRA, went on to study history at Trinity and grew into a fearless, award-garlanded Harvard professor specialising in the growth of terrorist movements.

Before her ascension to Oxford, she had made Scottish history by becoming the first female vice-chancellor at St Andrews in its 600-year history, as well as the first Roman Catholic.

A passionate believer in freedom of expression, equal opportunity and gender equality, she also put manners on her next-door neighbour, the Royal and Ancient golf club, which had refused her the honorary membership extended to her male predecessors.

The club finally admitted women in 2015. Her stance was about more than feminist ideology; she was head of an organisation of 10,000 people, for which networking was a vital part of the job.

As the first of her family to go to college, she is an evangelist for education, saying it made possible the trajectory of her life.

She told this interviewer in 2014 that she once asked her father what were his ambitions for his four daughters: “He thought about it for a while and said – ‘that one enter the convent and none end on the shelf’.”

On her appointment to Oxford: “I look forward to the day when a woman being appointed isn’t in itself news. Unfortunately, academia, like most professions, is pyramid-shaped – the higher up you go the fewer women there are.”

On equality, from her installation speech: “In an increasingly complex world, the best may not be those who look and sound like ourselves.”

Born and brought up in Belfast, law professor Christine Bell is recognised internationally for her work on peace agreements: “It is fascinating to see how much violent intractable conflicts are resolved through legal language . . . the Northern Irish peace process was of course a highlight because the conflict was so much a feature of my life growing up – I felt lucky to be at the heart of legal and constitutional thinking over how to ensure that human rights and equality were provided for.”

In addition to her academic work, Bell has been chair of the Committee on the Administration of Justice, and was a founder member of the Northern Ireland Human Rights Commission.

She describes both Mary Robinson and Inez McCormick as formative role influences.

Bell has six children, who daily challenge her legal skills, not least in pedantic argument and conflict resolution.

“I think that women often do need to perform differently from men. Most universities show that men are paid more than women at the same level. The more I have moved into leadership positions the more it seems that there is a really narrow space for what is seen as ‘good and strong’ female leadership.”

“Female solidarity does exist and has been very important to me. International law has a lot of strong female leaders – and I have found women very supportive even when they did not know me well and there was no real reason for them to support me. On the whole, I think women perhaps network less than men – perhaps we need to be more proactive about supporting each other and understanding our influence.”

To what extent does she think it is becoming easier for women to succeed in her field?

“It has become easier for women to succeed, simply because it is now more normal. In my university, the proportion of women professors has increased dramatically in the last years. In my experience, juggling work and home life and the different expectations on men and women in the home remains a barrier to women progressing, but increasingly also impacts on men. It is a difficult one because to address it involves not just addressing the workplace but addressing intimate relationships between men and women in the family.”

What would she say now to someone at the start of their career in this area?

“It is an amazing career and it is a tremendous privilege to be an academic. Try to do work that is ‘real’ in terms of making a difference in the world, and try to avoid strategising around your ‘career’ – doing good and real work is your best way forward because for all the faults of the academy it is surprisingly good at recognising and valuing good work whether in teaching or research.

Sr Cyril Mooney has spent six decades working with street children in Calcutta. The nun, who was granted a degree in zoology before joining the missions in India in 1956, was responsible for transforming a 120-year-old upper-class private Loreto college in Calcutta into the “rainbow” Sealdah school, which is held up internationally as a model for equality-based educational change.

Sealdah initially had a 25 per cent quota reserved for poor students on its roll books, with accommodation provided on site, a model which has since been adopted for all public schools by the West Bengal government.

The one in four quota for underprivileged students has also been made law for private schools across India as part of the Right to Education Act. Only half of the students currently at Sealdah pay full fees.

Now retired as principal, Sr Cyril still trains teachers at her local university in Calcutta, and gives presentations internationally about inclusive education policies. She is a fellow of the Ashoka foundation, which promotes “changemaker” schools in Ireland and around the world.

She has received multiple awards for her work on education equality, as well as four honorary degrees from universities in Ireland, the UK and India.