Age-gap relationships: why all the bad press?

Stephen Fry recently married a man 30 years his junior. What factors determine the chances of success of such relationships? 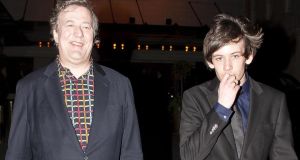 Age-gap relationships are and always have been controversial, but if you are limiting the pool you choose a mate from by age, you could be losing out.

I spent seven years with a partner 25 years older. His hair was white and mine a teenage blond, and we turned heads wherever we went, although I didn’t feel an age gap and nor did he. Not everyone approved, but that hardly mattered.

We were happy until the deal-breaker appeared: I wanted children and he didn’t because he had several already. And so I became attracted to someone closer to my own age: two years older to be exact, which is the average age gap in Ireland and the western world generally. I married the man and had three children.

Still, looking back on my age-gap relationship, I wouldn’t have had it any other way. Measuring the value of a relationship in terms of the age of the partners and the longevity of the union may not be the best rule. As psychotherapist and agony aunt Trish Murphy says, “While any parent would be justified in expressing concern about a 20-year age gap, having a good relationship at any stage of your life is worthwhile, and it would be good to cherish and value that relationship for as long as it makes sense.”

Age gaps can work really well. “The success or failure of relationships and marriages comes down to a number of interacting factors, and age is just one of them,” says psychotherapist Brendan Madden, former director of Relationships Ireland.

“Age gaps work when the gap increases the likelihood of kindness and generosity, and work against the relationship when they don’t,” says. Madden. “An older partner may be more appealing if the younger partner can’t find these traits in their peer group.”

That could explain why 57-year-old Stephen Fry recently married a man three decades younger, 27-year-old Elliott Spencer. While we really have no right to surmise what’s going on with them, we still tend to speculate about the power balance in age-gap relationships.

A downside, says Murphy, is that “we often need our community of family and friends to hold the faith for the relationship while we dither or experience doubt. The high-age-difference couple might find they miss out on this support, leading to an earlier demise of what could perhaps be something long-lasting.”

When an age-gap couple has decided not to have children, “the rules and boundaries are different, and perhaps the age difference is one of the first to go,” adds Murphy.

She sounds a note of caution: “Where one person has age and money and the other has youth and ‘aliveness’, it can be a fair exchange or it can sometimes be an abuse of power if the younger person has no other income or means of support. My guess is that true friends will reflect the truth back to you in these situations and it is worth listening to them.”

Madden says that “if the younger person’s search for an older mate is motivated by material considerations, such as access to financial security and status, then choosing an older partner is more likely to stack the odds against a successful long-term relationship,” says Madden.

The statistics are not kind

Statistics are against large age gaps working. The divorce rate among people close in age (usually with the male partner two years older) is 3 per cent, while it is double that for couples 20 years apart. The bigger the age gap, the greater the fragility of the relationship, especially if the issue of having a family comes into play.

That doesn’t mean that widening your horizons to include much older or younger people is a bad idea; just be prepared to enjoy it while it lasts.

If you want children and are considering a relationship with someone considerably older, it is best, he advises, to discuss this from the beginning. If you don’t want children, you should lay this on the table early too.

For those of us fascinated by April- November relationships we see in the media, rather than peer and judge through the social-media curtains, it might be better to be open about the advantages: greater financial security and the fact that older men, as Madden says, “may be more committed to parenting and less overwhelmed by the responsibility”. Likewise, an older woman who has had children and doesn’t want more might be the right choice for a younger man who doesn’t want kids.

THE CELEBS: AGE-GAP RELATIONSHIPS IN HOLLYWOOD

After George Clooney married Amal Alamuddin, 17 years his junior, Tina Fey commented at the Golden Globes that Clooney would rather float off into space then spend time in a lift with a woman his own age.

Age-gap romances are very Hollywood, maybe because they’re allowed to break the rules more than the rest of us. Marilyn Monroe and Arthur Miller had 11 years between them (didn’t last); Brad Pitt is 11 years older than wife, Angelina Jolie (has lasted so far); actor Stephen Moyer is 10 years older than Anna Paquin; Humphrey Bogart was 25 years older than Lauren Bacall (it lasted); magician Paul Daniels and Debbie McGee have been hanging in there for 20 years; Jeff Goldblum is 31 years older than Emilie Livingston (31); Hugh Hefner and Kendra Wilkinson have a 60-year age difference. And then there’s 112-year-old Ahmed Mohamed, who married a woman 93 years younger in Somalia, which takes the wedding cake.

Older women/younger man romances are more difficult to find but they do exist. Director Sam Taylor-Wood is 23 years older than her husband, actor Aaron Taylor Johnson; Susan Sarandon split from husband Tim Robbins (12 years younger) and found solace with Jonathan Bricklin (30 years younger). Julianne Moore is nine years older than Bart Freundlich (both left) and it has lasted for 19 years. And Tina Turner is married to Erwin Bach, 16 years her junior.

Going younger doesn’t mean you can’t also go older. Actor Tilda Swinton has had two partners, one 20 years younger and the other 20 years older, and she says they are all great friends who visit each other’s homes regularly.

Covid jab: Ryanair will not ask for proof of vaccination within EU
9

Tanya Sweeney: The most dispiriting celebrity interviews I have conducted
10