Making their presence felt in hot pinks, red and oranges, these flowers are a brilliant addition to a summer garden 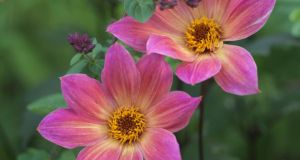 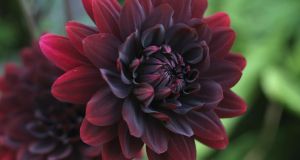 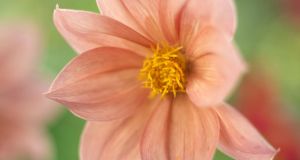 Is there anything quite as delicious looking as a dahlia flower? Or a genus of plants quite as varied or as versatile? In the kitchen garden I grow a mix of the more fiery coloured cultivars next to hot

In the kitchen, I like to use a smattering of their vibrant petals to bring droplets of colour to a summer/autumn salad or a fruity punch bowl. In the flower border, I grow them alongside a mix of ornamental grasses and other late summer flowering annuals and perennials, threaded through airy, purple Verbena bonariensis, the lilac flower spires of Salvia “Amethyst”, wispy Stipa tenuissima and crocosmias for a vivid colourful seasonal display.

Most, I raise from plump tubers potted on in the glasshouse in spring before transplanting them into their final positions in early summer, while a handful of others are grown from cuttings (these root very easily in spring), or from seed given to me by a generous gardening friend. The first few flowers appeared some weeks ago, each brilliantly colourful bloom a promise that the long, hot days of high summer had finally arrived. Staked, kept regularly dead-headed, protected from slugs/snails and given a fortnightly potash-rich liquid feed, I can expect these plants to keep blooming until the first hard autumn frosts. Given the extraordinary beauty and variety of its flowers, it’s strange to think that the dahlia, a native of Mexico, was first cultivated by the Aztecs as a food and medicinal crop before making its way to Europe in the late 18th century via a shipment of seeds to the Royal Botanic Gardens of Spain. From there, this tuberous flowering perennial then made its way to other great cities of the world: Paris, London, Berlin and St Petersburg. Since then, successive generations of horticulturists have left their mark on this remarkable genus, hybridising the different species to produce thousands of different cultivars.

Which are the best? That’s almost impossible to say, depending as it does upon individual taste and colour preferences as well as the size of your garden. But I’d certainly single out the Karma collection of dahlias, bred in the Netherlands over the last number of decades by Dutch brothers Kees and Aad Verwer and selected not only for their outstanding floriferousness, flower shape and colours but also their long straight stems and long-lasting blooms – a great boon for flower arrangers who want flowers with a long vase life.

Among the loveliest is the chocolate-purple “Karma Choc”, the ember-orange Karma “Fiesta” and velvet-red Karma “Naomi”. The same breeders also produce what’s known as the Happy Single Dahlia collection, a range of medium-height, very garden-worthy plants with single flowers and dark, decorative foliage that includes “Happy Single Kiss” (brown-eyed, peach flowers) and “Happy Single Flame” (brilliant-red/yellow flowers, deeply cut foliage). Other dahlia varieties worth seeking out include those created by the distinguished British dahlia breeder, Mark Twyning. Amongst them is “Twyning’s After Eight” (white flowers atop dark foliage) and “Twyning’s Revel”, a medium-sized, dark-leaved, single-flowering dahlia that produces a mass of pink, orange flowers.

One of the latter’s parents is “Magenta Star”, a fabulous dahlia produced by Dr Keith Hammett, another distinguished dahlia breeder who has also left his creative mark on this fascinating genus. Look out for his “Mystic” range as well as the brilliant-red “Dovegrove”.

Helen Dillon grows the latter in her wonderful Dublin town garden along with a dahlia called “Pam Howden”, a breathtakingly beautiful “waterlily” dahlia with peachy-orange petals. Dillon’s garden is also the place to see some other outstanding dahlia varieties, including the magnificent deep-purple “Admiral Rawlings”, a vigorous, tall plant with glamorous large blooms that beg to be picked and admired close-up by floating them in a glass bowl.

No discussion of dahlias would be complete without some mention of the “Bishops”. In my garden I grow the dark-leaved, single-flowering, crimson-orange “Bishop of Auckland” but the brilliant-red “Bishop of Llandaff” remains a favourite of many gardeners. Named varieties aside, it’s well worth growing some of the species dahlias for their graceful growth habit and their understated flowers.

Among the loveliest is Dahlia australis, which reaches up to two metres in height and produces a mass of starry pink flowers with golden eyes. Its seeds are available from Jimi Blake of Hunting Brook Gardens, another Irish garden well worth visiting over the next couple of months for its collection of dahlias, as is that of his sister June Blake.

Avon Bulbs sell seed of the leggily beautiful, scarlet-orange flowering D coccinea var palmeri, which was collected in South America by the botanist Dr James Compton. Surprisingly hardy (it has survived temperatures as low as minus 15 degrees), this elegant dahlia will reach a height of two and a half metres and is valued as much for its finely cut, lacy dark foliage as it is for its vibrant flowers. All dahlia-growing gardeners must decide whether to take the gamble of leaving them in the ground to overwinter, or lifting and storing the tubers somewhere frost-free, dry and cool to re-pot the following spring. My choice is the latter, for reason that I couldn’t bear the thought of my garden being without these beautiful flowers.