‘Great cat’ Cartier jewels out of the bag again

Tiger jewellery once owned by the Duchess of Windsor to be auctioned by soprano Sarah Brightman with a top estimate of $2.5 million 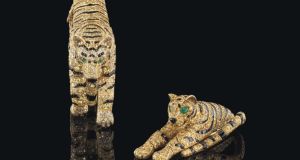 The two famous pieces of Cartier tiger jewellery are now being sold by soprano Sarah Brightman.

Two pieces of tiger jewellery by Cartier, which were formerly owned by the Duchess of Windsor, will go under the hammer at Christie’s in Geneva on Tuesday. A bracelet and brooch – in gold set with onyx, diamonds and emeralds – will be offered as one lot with a combined top estimate of $2.5 million (€2.01 million).

Auctioneers don’t normally name vendors but these jewels are among the most famous in history so, rather than the customary reference to ‘Property of a Lady’, the catalogue lists the owner as Sarah Brightman, the English soprano perhaps best known for her 1996 duet with Andrea Bocelli of Time To Say Goodbye which sold 12 million copies.

When the Duchess of Windsor died in 1986, she left her vast collection of jewellery, including seven Cartier ‘Great Cat’ pieces, to charity. The collection was sold at auction by Sotheby’s the following year in a landmark auction which realised €45 million,with the proceeds going to medical research at the Pasteur Institute.

The names of the buyers were not revealed at the time, but in January 1988, Brightman arrived with her then husband, Andrew Lloyd Webber, the composer of Cats and other musicals, at the opening party for The Phantom of the Opera in New York adorned with the Duchess of Windsor’s tiger bracelet and brooch.

The cat was out of the bag. Christie’s said: “Andrew Lloyd Webber bought these iconic jewels for Ms Brightman as a present in celebration of the huge London and Broadway success of the musical, which he wrote and in which she starred.”

In a statement, Christie’s says: “Over the years, the jewels have brought immense joy to Ms Brightman, who would now like to release them to new splendour in order for others to appreciate them as she did”. It adds that she intends to “offer a portion of the proceeds from the sale to The Andrew Lloyd Webber Foundation” which is a cultural charity.