Where’s the beef? Why are Irish men so much fatter than Irish women? 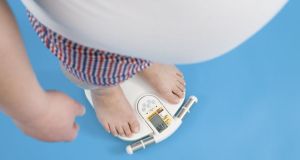 Tipping the scales: by 2030, 58 per cent of Irish men are expected to be obese. Photograph: Getty Images

We’re all getting fatter, but Irish men are getting fatter fastest. The prognosis is poor: by 2030, 58 per cent of Irish men are expected to be obese, topping the scale of all European countries, according to a UK-based study published last year. If you add the projected number of overweight men to the Irish total, the figure is even worse, coming in at a gut-busting 90 per cent.

The big question, of course, is why. What is it about living on this island that makes Irish men, in particular, stuff themselves silly, with so little regard for the health consequences?

Many reasons – from simple greed or laziness, to more complex speculations about how men respond to stress, or marriage, or whether they are especially sensitive to the effects of chemicals such as phthalates, commonly found in household products – have been forwarded for male weight gain.

Dr Aileen McGloin, from Safefood, has a list of contributing factors as long as your arm, all of which, it seems, can be summed up by one single sentence. “Men,” she says, “live in a different food world.”

A different food world? Hang on, don’t we all occupy the same universe of choices, populated by temptations like fat-laden ready-meals and sneaky snacks under the desk at work? But McGloin says that men’s experience of eating, and all that goes with it – the shopping, the preparation, the amount they actually consume – is often markedly different to how women encounter their food.

Men are more likely to eat larger portions, they’re less likely to be aware of healthy eating guidelines, and many don’t regard eating well as an important factor in their long-term health.

Is it just about complacency then? Even ignorance? McGloin isn’t keen to be so judgmental. Rather, she says, it’s a matter of cultural conditioning, right from the start.

“You have to be careful about over-generalising, but men are less likely to learn about food in childhood, so they sometimes come into adulthood without the skills to make good decisions,” she says.

In practice, this might mean ordering a stodgy takeaway, rather than lovingly creating a healthy soup from scratch: food is seen as fuel, its function is to fill you up and keep you going, not nurture your health, appearance and general wellbeing. This devil-may-care attitude may also be reflected in a sloppier approach to hygiene: eating morsels that have been dropped on the floor, or taking a cheerfully cavalier approach to out-of-date foods.

Irish men are more inclined to dish themselves up “big meaty dinners”, as McGloin calls them, without regard for the waist-expanding consequences. There’s little shame involved; in fact, overweight men – in blithe defiance of what the mirror is telling them – tend to report higher satisfaction with their body weight and don’t have any particular compulsion to try to change it.

They feel just fine the way they are, thanks, and McGloin says the rest of us (surprisingly) may well agree. “Society recognises men as less overweight; even health professionals are less likely to pick up on obese men and send them to be referred.”

It’s as if we unconsciously expect men to take up more physical space in the world. But does that mean we’re colluding in male self-deception, at the expense of their own health?

“There’s a definite cultural bias,” agrees Colin Fowler, director of the Men’s Health Forum of Ireland (MHFI). “Both sexes still follow traditional rules and roles, and men see their weight in different ways to women. It’s about the big man, with the big beer belly, all kinds of ideas of virility and masculinity. Think of the classic cartoons – the curvaceous woman stares in the mirror and she thinks she looks fat, while the beer-bellied guy looks in the mirror and he sees Adonis reflected back at him.”

If the situation is to improve, says Aileen McGloin, “then everyone needs to change, right down to the language that we use.” And if men are adrift in the food world, then that’s often because their female counterparts – the undisputed queens of that domain, at least in the traditional domestic setting – don’t make space to let them in.

“Food and health are a big part of female identity, and women are good at these things,” says McGloin. “But not allowing men to shop or cook actually perpetuates the current situation.”

Colin Fowler says that men – reasonably enough – often require strong reasons for making changes to their diet or weight. “Say it’s a dirty night, the football’s coming on the TV, and they want to sit down and watch it with a curry, they’re going to be asking, why would I go out to a weight-loss class instead?”

Yet Fowler and McGloin point out that men who do engage with weight-loss programmes tend to do well, and are more likely than women to stick at them. A 2014 study by the University of Aberdeen, to which the MHFI contributed, also found that when it comes to classes, men prefer the use of straightforward “business-like” language, they like things done with a bit of humour, and they benefit from the moral support of other men alongside them.

“It’s often said that men don’t talk,” says Colin Fowler, “but men quite frequently say to us that they don’t talk because people don’t listen.”

While there’s no clear-cut recipe for dealing with the dilemma of Irish male obesity, listening to how men themselves want to approach weight loss – rather than imposing one-size-fits-all advice drawn from the female-oriented diet industry – might be a good place to start.

Weighing in: How fat are we?

How to be happy in a time of uncertainty
3

How to politely leave a WhatsApp group, and other social media conundrums
9