What turned me into a weekend bike racer 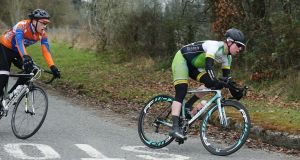 Kilian Doyle leads on the first lap of the Lucan GP A4 race. (He didn’t win.) Photograph: Lorraine O’Sullivan 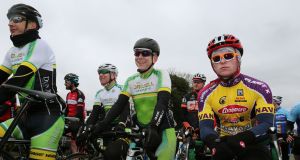 I have a confession to make. I’m a middle-aged bicycle racer. For six months of the year, my Sunday mornings are spent driving around the country to compete in amateur races. The other six months are spent training for them.

I am not alone. There are thousands of us, lined up every weekend at the start line in glamorous places such as Slane, Carlow, Stamullen and New Ross. We come in all ages and sizes, from winnowy teenagers harbouring dreams of a professional career, to old farts whose greatest ambition is to get around the course safely without being humiliated.

Our bikes are made of carbon fibre, our saddles are unyielding and bladelike, our wheels are skinny as fingers. We tear along in a snaking bunch, horn-blasting motorbikes guiding our way and warning oncoming traffic of our arrival. It’s noisy, it’s fast, it’s frightening – and it’s utterly invigorating.

Riding in a peloton of 100 people of varying skill levels at speeds of up to 60km/h is no joke. To do it successfully takes nerve, experience, intelligence and style. Luck helps too. It’s like a flowing, living organism. Elbows, knees and hips clatter off each other. The aim is to stay upright at all costs. Push on. Don’t yield. Don’t think of the consequences, however serious they can be.

Carbon fibre makes a horrible, horrible sound when it snaps. It sounds painful. It sounds expensive. It’s invariably accompanied by shouts, oaths, sometimes screams. Even minor spills can result in snapped bones or huge patches of skin being grated off by tarmac. Ambulances follow every race. They rarely go unused.

Such are the perils of racing. It’s part of what makes it so exciting. One must be stoical. If you crash, you crash. And if you never crash, you’re not trying hard enough.

Speaking of whom, when I first started cycling seriously in the 1980s, I worshipped Kelly. Still do. Stephen Roche, despite his Tour de France, Giro d’Italia and World Championship successes, less so.

The taciturn Kelly had this innate inner toughness that I aspired to. Covered in mud, battered by wind and tormented by drug-addled Belgians, he just ploughed on regardless, always humble, always exuding an unbreakable desire to win that separated him from the vast majority of humanity who, under similar circumstances, would have given up and gone back home to an easier life on the family farm, dreams of greatness abandoned.

He was the undisputed best all-round cyclist in the world for years. Not bad for a shy lad from Carrick-on-Suir who used to nod his answers in radio interviews.

It was this love of Kelly that drove me, a skinny self-conscious teenager, to ride and race bikes. Sadly, it didn’t last, the 16-year-old me eventually choosing chasing girls and partying ahead of cycling. Sometimes, I wonder why. Until I remember getting up at dawn to ride around frozen Wicklow mountain roads in the winter, dressed in a sodden woollen jersey and shorts while perched on a damp wodge of chamois that hardened as it dried, with predictably painful consequences. I admit I took the easy option.

Despite my abandonment, I never lost my love of cycling, even through the Armstrong years, when the Tour de France was little more than Trainspotting on bikes. But it was only a few years ago that I returned to it with gusto. I had a friend with whom I raced as a teenager who was exhorting me to join him up the hills. I also wanted to lose weight and give up smoking and I needed a new hobby, as I’d fallen out of love with the vintage BMW that lay rusting in my driveway, its very presence mocking my ham-fisted mechanical skills and empty bank account. Enough.

So I sold the car, bought a bike and joined Orwell Wheelers cycling club. I gave up smoking and lost two stone somewhere along the way, and here I am, three years later, turning up on Sunday mornings, legs shaved and oiled, to put myself through untold agony with scores of other like-minded souls on the twisty backroads of rural Ireland.

I’m under no illusions. I know I’ll never wear the yellow jersey, never feel the thrill of crossing the finish line of a big race first, arms in the air. But that doesn’t stop it from meaning the world to me.

I cherish the solitude of long solo training rides and the headspace they afford me, crave the feeling I get as the stresses and strains of everyday life slip away as I push myself deeper and deeper into the pain cave. I relish the challenge of pitting myself against people faster than I am, I feed off the adrenaline, the camaraderie with my team mates. I love being enrapt in the now of a bike race, synapses firing, knowing that to lose focus for a nanosecond could mean a trip to the hospital, or worse.

Anyway, ridiculous though it may be, it could be worse. I could be playing golf.

‘I felt safe in Korea. Returning home felt like a gamble’
5

Lavinia Kerwick: 'My life in my 20s and 30s was absolutely destroyed, taken away'
6

Loftus Hall: Spooky pile with a haunting history for €2.5m
8