Television: Christine Bleakley’s ‘Wild Ireland’ is another celeb travelogue. But this one’s worth watching 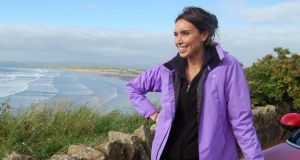 Wild Ireland: Christine Bleakley – at Rossnowlagh, in Co Donegal – is enthusiastic but not gushing

High on the list of TV formats I have grown weary of is the celebrity travelogue. There are so many of them, typically featuring a well-known face who travels to somewhere enviable while a camera captures their TV-acceptable impressions. They’re not proper holidays: no one ever kills time buying random cosmetics in the duty free; no one says “this place is a kip”, “the food gives me the runs” or “I’m only here because they paid me”.

Ed Byrne and Dara Ó Briain’s chummily titled Dara and Ed’s Big Adventure is a prime recent example of the genre, with the two friends travelling from North to South America. You could see what was in it for them: they looked like they were having a great time, and bully for them. Less clear is what could be in it for us viewers.

The most toe-curling examples of the celeb travelogue are the ones where well-known Irish people working abroad come back to ramble around the auld sod with a blarney-soaked script. So the thought of watching Christine Bleakley, the Co Down-born TV presenter, travel the 2,500km Wild Atlantic Way, in Wild Ireland (UTV Ireland, Wednesday) might seem best approached with a sceptical eye.

But this is wrong: the show is very good, largely because Bleakley conveys enthusiasm without gushing and is gently informative without being worthy.

The production also strikes a nice balance between magnificent scenery and things to do along the way. Bleakley hikes up Slieve League and goes seacliff jumping – and, quite reasonably, seems terrified of both before overcoming her fears, which is appealing and encouraging to watch.

Bleakley avoids a staple of hokey Irish travelogues: the dreaded “local characters”. Everyone she interviews in this first of six programmes has something interesting to say, from the bloke with the cliff-jumping business to the woman who smokes salmon.

It’s a pity, though, that the producers haven’t more confidence in the scenery’s ability to stir the senses: not every scene needs all that surging background music to give it impact. Still, Wild Ireland is unusual, an Irish travel programme that’s as appealing to locals as it will surely be to potential foreign visitors.

There’s Bríd, a single mother of two boys from Inishturk, Co Mayo. There are the O’Leary brothers on Whiddy Island, off Co Cork, which is not just a stop-off for oil tankers: 22 people live there, and the brother are cross that more people don’t know that. And there’s Shirley, a community activist, and Neilie, a fisherman, on Arranmore, Co Donegal.

The narrative chops and changes between their stories, so it takes a while to bed in and remember who lives where. Although the islands aren’t the same, there are similarities in the restrictions and freedoms of living offshore.

The contributors are easy in front of the camera, relaxed and open in telling their stories. Given the obviously small pool the producers had to choose from, this says a lot. Through the interviewees’ experiences we get a clear idea of how hard it is to live on an island, how passionate these people are about their home places, and how their individual lives have an impact on everyone in their communities.

Bríd’s youngest is about to go off to the mainland for secondary school, which leaves the island’s primary school with just two pupils.

Bríd, though, has met a man; he came to stay in her mum’s B&B, and it was love at first sight. After a long-distance courtship he relocates to Inishturk from Sweden, and there’s a bonfire and a welcoming party on the pier. (No pressure for the poor fellow there, then.) A new inhabitant on the island, where the population is on the slide, is a real reason to celebrate.

Not everything is sweetness and light in Islanders: Neilie’s simply told story of how EU fishing rules have devastated his livelihood goes far in explaining why the EU fishery policy is so controversial. And Shirley’s attempt to unite Arranmore with a representative council throws up more underlying tensions than you’d find at a Fianna Fáil parliamentary meeting.

Sickly in the city

In a tiny flat in Dublin two paramedics, Andy O’Toole and Laura Hogan, work on a man who has overdosed on heroin. They inject him with an antidote and resuscitate him. He sits up. “I’m after paying for heroin and you’re after wearing it off,” he accuses them, the threat of violence in the air.

“Yeah, but you were dying; you weren’t breathing,” says O’Toole, who then patiently tries to cajole him to go to hospital. The belligerence goes on. He won’t.

Within the hour the crew are called out to another overdose – the new heroin on the streets is so powerful it can cause instant respiratory failure and cardiac arrest. Again, after working hard on the man while his daughter and partner look on, he is resuscitated and begins to give the paramedics dog’s abuse for wrecking his buzz.

“Yeah, but you were dead,” says O’Toole, later saying, a bit sheepishly in an interview to camera, “I can be very direct.”

TV3 has made this sort of fly-on-the-wall series before, and they’ve been mostly off-putting in their breathless search for sensationalism. But Ireland’s Paramedics, made “with the help of the National Ambulance Service”, is different: it is calm, quiet and genuinely revealing of the working days the paramedics put in – and of the society we live in.