The Heiress review: youthful desire versus elder tyranny, with a cash prize

The Gate's big Christmas show is an adaptation of a Henry James’s novella. It could be played as a reassuring costume drama – but instead we get something more complex 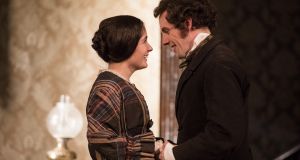 It is a truth universally acknowledged that a single man in possession of a good fortune must be in want of a wife. (Or so Jane Austen winked.) But Henry James’s 1880 novel Washington Square, adapted for the stage in 1947 by Ruth and Augustus Goetz, wondered how that desire might alter when the roles were reversed.

Here, Catherine Sloper (an engagingly timorous Karen McCartney) is a young woman with a significant fortune but few romantic prospects. We are frequently told that she is gauche and graceless, and, more to the point, so is she: inhibited by a sardonic and implacable father (Denis Conway’s magnetic Dr Sloper) who imprisons her in the shadow of her idealised, deceased mother. When a penniless suitor arrives (Donal Gallery’s fascinatingly insincere Morris), hell-bent on marriage, she believes that youthful desire can defy elder tyranny. He, of course, smells a rat after her inheritance. In both cases, where there’s a will, there’s a way.

This vision of 19th century New York could be wrapped up snug in a reassuring costume drama, but though designer Jonathan Fensom provides a townhouse of rich detail with voluminous period dresses, his palette is admirably muted, all sepia and tobacco browns, as slyly oppressive as the portrait of Catherine’s mother, draped with a shroud. It also allows director David Grindley to focus on the play’s truer identity, as a courtroom drama with hearts in the dock.

“Suspicion?” scoffs Conway when challenged by Marion O’Dwyer’s enjoyably good-hearted aunt Lavinia. “It is a diagnosis, my dear.” Conway gives a performance of inflexible conviction, softened slightly by a cumulus of facial hair, believing that all falsehood will crumple under his wry stare. And so he builds a case, calling witnesses (Tara Egan-Langley as Morris’s sister), presenting exhibits (the fine gloves of a supposed pauper), confident that Morris will break under cross-examination.

Grindley has a similarly cool awareness of the stiff artifice in this world, sometimes nudging to see if it will wobble. Visitors sit so starched they could be waiting for a portrait painter; everyone speaks with the automatic gallop of an Aaron Sorkin script; and in a subversive blink, O’Dwyer and Gallery begin one scene, from a standing start, with an eruption of laughter. The play, like the society, is fascinatingly ambiguous about people’s motives.

There is likewise a complicated psychology in its central relationship, with which the production seems less occupied, between a father who wishes to be rid of his daughter but can’t let her go. Conway is self-possessed throughout, rarely overtaken with an anger he cannot understand. McCartney strikes a nice balance, combining a desperate smile and alarmed eyes, but the cool-tone of the production means this believer in passion rarely gets to display it.

We are left, though, with something more refreshingly and engagingly complex. Finally in control of her own destiny and freed from doubts, McCartney’s Catherine assumes a familiar – even diagnostic – terseness. Is this a case of self-realisation or fatalism? Will Catherine escape her father or, horrifyingly, turn into him? The verdict is yours.

Bridge on the River Kwai: ‘This film does not authentically portray the conduct of British officers’
7