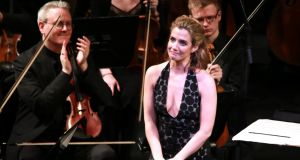 Lisa Dwan on stage at the NCH. Photograph: Frances Marshall 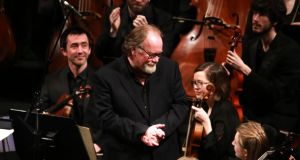 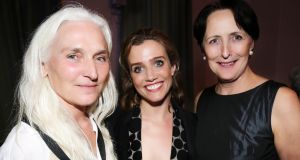 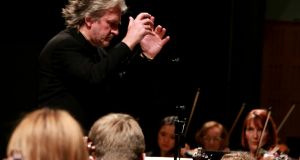 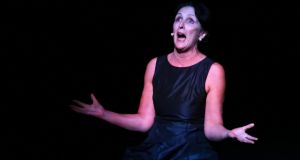 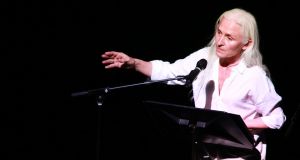 The latest night in the NCH’s celebration of Ireland’s centenary set a course for the continent, and examined through words and music how the nation state left England behind, and aligned itself culturally with Europe.

This was no exercise in academia: it was full of surprises, one-off performances and moments to hold the breath.

Lisa Dwan opened proceeding with a performance of Beckett’s Not I. Typically staged with just the performer’s mouth showing under a single spotlight, the Beckett estate gave permission for the show to be retooled specifically for the NCH. Released from the shackles of her trussed rig, Dwan appeared on stage behind a simple handbar, giving the audience a further insight into the physicality required for one of thetoughest pieces in theatre. The actress recently announced she is retiring from performing the role; watching this furious, terrifying piece, no one could blame her.

She followed this with Footfalls, a more drawn out affair that echoed around a concert hall that was for once dipped entirely in darkness.

Few 1916 heroes have enjoyed a renaissance in this centenary year as powerful as that of Roger Casement, and here he is the subject of two performances. Owen Roe delivers an extraordinary piece of oratory, written by Bernard Shaw for Casement, and never before heard in public. With the latter facing the scaffold, Shaw urged Casement to ignore his legal advice and deliver this ingenious speech from the dock, which made no apology for the Rising, and compared the defeat of the Irish rebels to the British at Gallipoli.

“If you persist in treating me as an Englishman, you bind yourself thereby to hang me as a traitor before the eyes of the world,” it runs. “Now as a simple matter of fact, I am neither an Englishman nor a traitor: I am an Irishman, captured in a fair attempt to achieve the independence of my country; and you can no more deprive me of the honours of that position, or destroy the effects of my effort, than the abominable cruelties inflicted six hundred years ago on William Wallace in this city when he met a precisely similar indictment with a precisely similar reply, have prevented that brave and honourable Scot from becoming the national hero of his country.”

In Roe’s masterly reading, the speech hums with resonance, and the audience is left with the finest parlour game: to wonder what might have been.

The second piece of Casement drama is written by Fintan O’Toole, who arranged this evening’s selection. It imagines Casement’s thoughts as he waits to return to Ireland for the Rising, in the cold rooms of Berlin’s Eden Hotel. He recounts the barbarism he witnessed in Peru, at the behest of the colonial masters of the rubber trade, the extent of which fomented his “disgust with empire”. In a reading by Olwen Fouéré, his abhorrence of the black wheels he sees everywhere, driving on modernity, takes on a surreal, poetic and powerful air.

There are musical riches too, with sean nos singer Síle Denvir stilling the room to perfect silence with a stunning performance from the balcony. Barry Douglas leads the Camerata orchestra in a programme that starts sweetly, with Schubert’s Du bist die Ruh and an arrangement of work by Irish composer John Field, before later moving into much darker territory, with Krzysztof Penderecki’s formidable Threnody for the Victims of Hiroshima. It’s an astonishing piece to hear live, the strange, unearthly low-end frequencies of the cellos and basses thrumming beneath the subtle keening of the violas and violins. It’s deeply unsettling and oddly beautiful and, in the hands of Douglas and Camerata, devastatingly effective.

There is a further, unscheduled surprise with Fiona Shaw delivering a reading of the last section of TS Eliot’s The Waste Land, and Olwen Fouéré returning for a final reading of Shakespeare’s Sonnet 154. It sends the crowd off on a lighter note, after an intense evening of culture that cleverly imagines and evokes a country trying to elegantly assert its own identity.

Ivan Yates turns the blowtorch on all politicians
7

Steve Coogan says ‘my Irish passport will be arriving shortly’
9