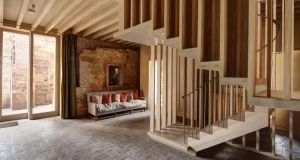 Astley Castle, which has been given new life by Stirling Prize winners Witherford Watson Mann 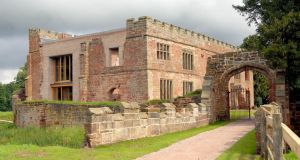 A holiday home inserted into the crumbling walls of Astley Castle in Warwickshire, by Witherford Watson Mann Architects, has won this year’s RIBA Stirling Prize.

It’s the third year in a row that Irish shortlisted practices have been pipped at the post.

Dublin-based O’Donnell and Tuomey were on the shortlist in 2011 and 2012 (for the Lyric Theatre in Belfast and an Irish language cultural centre in Derry), and this year three out of the six nominees were practices with Irish principals: Grafton Architects for a scheme in the University of Limerick; Heneghan Peng for the Giant’s Causeway Visitor’s Centre; and London-based Niall McLaughlin Architects for a chapel in Oxfordshire inspired by Seamus Heaney’s poem Lightenings viii (and its combined meaning of navis: nave and ship).

God is still in the details
Presenting the award for the castle, where George Eliot grew up, RIBA president Stephen Hodder said it “is an exceptional example of how modern architecture can revive an ancient monument.

“Rather than a conventional restoration project, the architects have designed an incredibly powerful contemporary house which is expertly and intricately intertwined with 800 years of history. Every detail has been carefully considered.”

The Irish entries were also praised for their details and going beyond the call of the briefs, with former RIBA president Angela Brady saying they were ground-breaking and delivered more than could have been expected.

Other projects on the six-strong shortlist were a reinvention of 1960s housing at Park Hill in Sheffield, by Hawkins/Brown with Studio Egret West; and a housing scheme in Essex by Alison Brooks Architects.

One of the five judges, Sheila O’Donnell, of Dublin-based practice O’Donnell and Tuomey, which has been on the shortlist four times, said: “There were intense conversations about all of the projects, all of which had a lot of good qualities. This won because it was felt to be a kind of paradigm of how things could go: the example it sets for what you can do to bring a building back into life beautifully.”