Modern Ireland in 100 Artworks: 1937 – Come Gather Round Me Parnellites, by Jack B Yeats

The Cuala Press ‘Broadsides’ offered the first collaboration in many years between the painter and his poet brother, WB Yeats 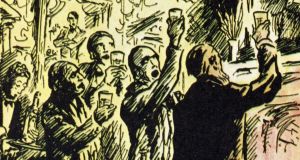 Broadsides: part of Come Gather Round Me Parnellites, by Jack B Yeats. Photograph: Royal Irish Academy 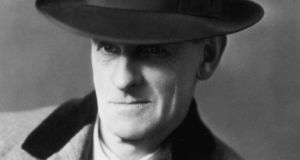 Broadsides: Jack B Yeats was editor and illustrator, selecting poems and traditional ballads and contributing his own versions under the pseudonym Wolfe Tone MacGowan. Photographs: Hulton/Getty

Jack B Yeats’s illustration Come Gather Round Me Parnellites was made for a revival of the Cuala Press Broadsides in 1937. Drawn in Indian ink in his late, loose style, the image shows four middle-aged men toasting a portrait of Charles Stewart Parnell in the sumptuous surroundings of a grand if antiquated dining room. An obsequious waiter stands to one side.

WB Yeats was very pleased with his younger brother’s work, praising it in a letter to his coeditor of A Broadside, Dorothy Wellesley: “My brother has got to perfection the old-fashioned highly ornamented Dublin hotel or tavern where such men gather after a Parnell celebration.”

This series of A Broadside, which lasted just a year, included musical scores as well as poems and illustrations. In editing it, WB Yeats was pursuing the connection between poetry and song, advancing the idea that poetry should be spoken or sung rather than read in silence.

The form of the Broadsides imitated that of the cheaply produced ballad sheets sold at travelling fairs and markets all over the country in the 19th century. WB Yeats began experimenting with the populist potential of poetry when he got the Irish Press to publish his poem on Roger Casement, to be sung to the air of The Glen of Aherlow, in February 1937. In Come Gather Round Me Parnellites the open-mouthed figures are shown singing another Yeats ballad.

The original Broadsides series, published by the Cuala Press between 1907 and 1915 in a limited edition of 300 copies, with hand-coloured illustrations, was part of the arts-and-crafts initiative run by Jack and WB’s sisters, Lily and Lolly. Jack was editor and illustrator, selecting poems and traditional ballads and contributing his own versions under the pseudonym Wolfe Tone MacGowan.

The early Broadsides played a crucial role in the Celtic Revival, disseminating not just poetry but also images that evoked a distinctive version of Irish identity. Strangely anachronistic, Jack Yeats’s naive illustrations depicted tinkers, ballad singers, pirates and circus performers, as well as scenes from rural life and imagined historic events. They suggest a primitive, timeless world that belonged more in the imagination than in reality.

The style of Come Gather Round Me Parnellites differs from Jack B Yeats’s usual treatment of song and patriotism, in presenting the singers as establishment figures rather than outsiders. Yeats continued to be an outsider, avoiding active membership of clubs.

This image may be an oblique reference to his brother’s more enthusiastic participation in such groups. The historian Roy Foster recounts how, in May 1937, four months after this image appeared, WB Yeats attended a drunken dinner of the Irish Academy of Letters at which FR Higgins and Frank O’Connor sang his new poems The Three Bushes and The Curse of Cromwell.

Divided by politics and personality, Jack and WB were never close. Although this later version of the Broadsides offered, as Foster says, the first collaboration between the brothers for many years, it was very much WB’s affair. Jack had strong republican beliefs but, unlike WB, rarely voiced his views in public and was determined that his art alone would convey his ideas.