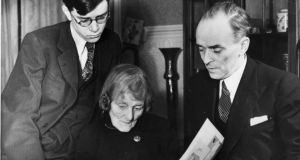 The signed copy of MacBride’s A Servant of The Queen, published in 1938, was donated by Enid McAleenan to an auction run last Sunday evening by the Yeats Thoor Ballylee Society, along with a letter written by MacBride to her late aunt Eileen.

Gonne’s letter refers to the importance of living a full, adventurous life and standing up for a “free Ireland”.

Ms McAleenan contributed the book and letter in response to an Irish Times (italics) article last week on the Yeats Thoor Ballylee Society’s campaign to restore and reopen the tower to the public.

Both items were bought by a couple from Salthill in Galway city, who beat bids from Dublin and Washington, US.

Ms McAleenan told the auction organisers she had wondered for many years what she would do with her important heirlooms and “knew at once, upon reading the article, that this was the perfect destination, and that her aunt would be delighted”.

A total of €10,000 was raised at the auction, which was held on the rooftop of Thoor Ballylee by local auctioneer Colm Farrell - dressed as Yeats.

A first-edition set of The Complete Works of JM Synge, printed by Maunsel & Co Dublin in 1910, was among other contributions, along with a donation of Vicar Street tickets by developer Harry Crosbie.

“Like Maud Gonne’s advice in her letter, they are standing up for what is rightfully theirs and fighting to save Yeats’s tower and their heritage,” Senator Healy Eames said.

“All funds raised will be used to open the tower to the public during the summer season in the stark absence of State funding,”she said.

Irish-American lawyer Joseph Hassett, who gave €31,000 to the community campaign, has been invited to the reopening of Thoor Ballylee on the 150th anniversary of Yeats’s birth, on June 13th.