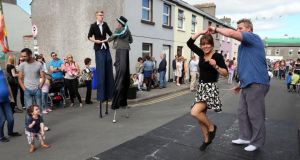 Having a swinging time during the 100th anniversary celebrations of ‘The West’ in Galway city at the weekend. Photograph: Joe O’Shaughnessy 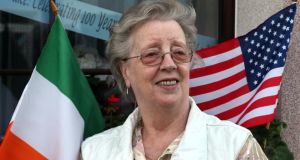 Long-time resident Rita Keady outside her home in St John’s Terrace during the 100th anniversary celebrations of “The West” in Galway city at the weekend. Photograph: Joe O’Shaughnessy 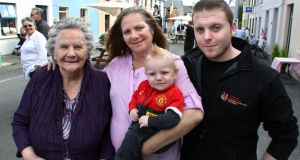 Sally O’Shaughnessy with her daughter Mary, great-grandson Cian (7 months), and grandson Andrew at the 100th anniversary celebrations of “The West” in Galway city at the weekend. Photograph: Joe O’Shaughnessy

“The West”, as that area is known, marked its centenary last weekend with a bunting-and-barbecue street party and open-air Mass.

Built in 1914 at a cost of £140 each, the network of two-storey “cottages” was commissioned by the then urban district council to alleviate housing problems west of the river Corrib.

Rents were fixed at three shillings and three pennies a week for Henry Street, and two shillings and nine pence for St Joseph’s Avenue and St John’s Terrace.

Many descendants of original occupants still live in the area – among them Sally O’Shaughnessy, a great-grandmother, whose parents moved to 20 St John’s Terrace in 1917.

She remembers games played on the street with 10 siblings – “Rounders, Jackstones, Shop, Queenie Queenie who has the ball” – and Black and Tan raids during the War of Independence.

“And another man from the street was being hunted by the Tans, but my mother, Mary King, went down to the docks to warn him,” she says. “They hid him under the stairs in number 6 and stacked a pile of turf over him.

“It was and is a great place to grow up in – if you wanted a chat, all you did was knock on the wall and a neighbour would come in.”

Rita Keady, also a great-grandmother, was born upstairs at home in number 5 St John’s Terrace and has lived there ever since.

Her mother, Mary O’Flynn, known as “Ciss”, laid out many of the neighbours when they died as there were no funeral parlours at the time.

Rita left school at 14 and worked in Stewart’s brace factory nearby for one pound and 10 shillings a week, giving 10 shillings each to her granny and mum. A regular treat was a four penny ticket to the Astoria cinema or “pictures” at Nile Lodge.

The proximity of “The West” to a local Royal Irish Constabulary barracks in Dominick Street meant that many houses were occupied by RIC families and by those who had served with the Connaught Rangers in the British army, Mick Harlowe of number 8 St John’s Terrace explains.

Pensions of soldiers who had fought with the Rangers in India, in the Boer War and first World War sustained the area, he says. “So people were not so happy with 1916 and 1921 down here, and didn’t get involved in the Civil War. There were no IRA men in these streets, and it was more like Galway’s Shankill than Falls, if you compare it to Belfast.”

A History of ‘The West’ Housing Estate 1914-2014 has been written for the centenary by historian Peadar O’Dowd for the West 100 Committee. It is available in local bookshops, priced €5.